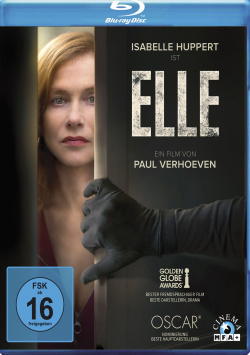 Film: Michèle (Isabelle Huppert) has both feet firmly on the ground. She is the head of a successful company for the development of video games, which she manages with sometimes undercooled precision. Meèle knows what she wants and she enforces it, whether she makes enemies with it or not. But when she is attacked and raped one day in her house, her life is thrown completely out of joint. On the outside she is almost frighteningly indifferent to what has happened. But inside she is driven by a desire for revenge. When she locates her attacker, she begins a dangerous game that threatens to get out of control at any time…

"Elle" is not the movie to be expected from a story about rape and revenge. Paul Verhoeven, known for his biting, enigmatic humor, has staged a vicious thriller that surprises with its use of deep black, sometimes very subtle humor and frees both perpetrators and victims from any moralization. What has emerged from this is disturbingly amusing, completely unadapted and 100% politically incorrect. The big trick is that Verhoeven doesn't let the story become a farce and her characters don't degenerate into completely overdrawn characters. Rather, he succeeds in making Michèle and every single step of her actions appear credible.

As so often Verhoeven lets the greatest malice pelt down on the viewer almost incidentally - whenever you don't expect it. In short sentences, the figures you think you have seen through suddenly appear in a whole new light. That concerns above all a character - whom exactly, that is not to be betrayed here of course. Just this much: How Verhoeven tears open an incredibly deep abyss in one sentence around this person, who has been portrayed in a completely different way until now, is simply grandiose.

"Elle" is a great production, but also excellently played, especially by Isabelle Huppert, who was rightly awarded a Golden Globe for her role and nominated for an Oscar. The film is not for the morally delicate and certainly not for people who are sexually inhibited. But if you want to look into the depths of the human soul in a surprising and wonderfully evil way, you should not miss this masterful thriller. Absolutely worth seeing!

Picture + sound: There is nothing to complain about about the audiovisual realization of the film. The colour scheme is very atmospheric and the contrasts are well balanced, especially in the darker moments. The image sharpness is consistently good, and even very good for outdoor shots. The DTS HD 5.1 mix is largely reserved, limited to dialogues and music. Every now and then, however, sound effects and ambient noises also ensure good use of the surround channels. Good.

Extras: Except for the trailer and further program tips, the Blu-ray unfortunately has no bonus material on offer.

Fazit: "Elle" is surprising, malicious, cleverly staged and brilliantly played. A sneaky little thriller that plays with morals in a wonderful evil way. The Blu-ray presents the film in harmonious picture and sound quality, but has no bonus material worth mentioning. But for the movie alone it's quite clear: Absolutely recommended!