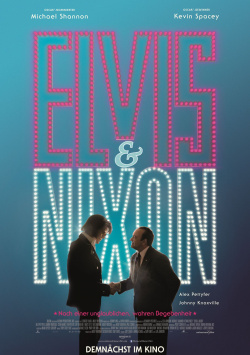 The guards in front of the White House in Washington D.C. were amazed when one day in 1970 nobody less than the King of Rock`n`Roll Elvis Presley (Michael Shannon) stood in front of them and asked for a meeting with President Nixon (Kevin Spacey). Because he of all people, who embodied youth culture like no other in the 50s and was a thorn in the side of moral guardians, wants to work for the government as an undercover agent and win the fight against drugs and communism. At first Nixon categorically refuses a meeting, but then - in exchange for an autograph for his daughter - is convinced that it could be advantageous for him to meet with the King. And so it comes to an encounter of two at first sight unequal men, who apparently had more in common than first thought…

director Liza Johnson skillfully mixes facts with fiction in "Elvis & Nixon" to an extremely entertaining meeting between two very extreme characters. With the help of Jerry Schilling, a long-time friend of Elvis, who is played in the film by Alex Pettyfer, Johnson and her team managed to keep the whole thing as authentic as possible despite some fictive elements. But really outstanding was the decision not to cast Elvis with an actor who was very similar to the King. At the beginning it seems a little strange to see Michael Shannon in this role. But the Oscar-nominated actor succeeds excellently in working out the different facets of Elvis, especially because he gets away from the usual imitations of the King.

Kevin Spacey, who currently shines in "House of Cards" as a fictitious US president, also delivers a real highlight as Nixon. These two main actors alone make "Elvis & Nixon" a great pleasure. This is intensified by the wonderful script, which is full of amusing dialogues. There may be some moments that would have benefited from a little bit more bite and that therefore seem a little tough. But all in all Liza Johnson offers her audience an extremely entertaining insight into a short moment in US history in which politics and the entertainment industry have mixed in a wonderfully absurd way.

So if you like light-footed entertainment cinema with great actors, clever dialogues and a great story, you shouldn't miss the meeting of "Elvis & Nixon". Absolutely worth seeing!]