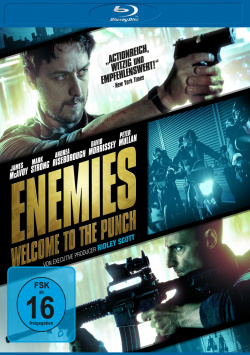 Enemies - Welcome to the Punch - Blu-Ray

Content: Since gangster Jacob Sternwood (Mark Strong) shot him after a wild chase and then escaped, the young policeman Max Lewinsky (James McAvoy) has only one goal: to put Sternwood behind bars at all costs. When his son Ruan (Elye's fork) is shot during a robbery and arrested for attempting to escape, Max sees his opportunity. He uses Ruan as bait to lure Sternwood, hiding in Iceland, back to London. But even though the gangster actually returns to his old home, Max doesn't succeed in catching him. Worse than that: he has to realize that he is on the trail of a large-scale conspiracy and that of all things Sternwood is the only one who can help him unmask the wirepullers...

With "Enemies - Welcome to the Punch" director Eran Creevy has delivered an atmospheric and entertaining crime-thriller, which has a great cast and a stylish look. Dramaturgically, there isn't really any new ground opened up and also the "surprising" twist is predictable for viewers who have seen some cop-thrillers in the last years. Nevertheless, the whole thing has some decent moments of tension and very well staged action scenes, so that the entertainment value is kept at a pleasantly high level over long stretches of the 100 minutes running time.

From the rapid chase through the extinct streets of nocturnal London via Sternwood's explosive escape from its hiding place in Iceland to a slow-motion shootout towards the end, the film repeatedly delivers small, fast-paced highlights to its viewers. Small lengths or dramaturgical pendants are easy to get over. But above all the actors are really good. James McAvoy tries here, as in "Trance" and "Drecksau", to play a morally rather ambivalent, somewhat broken character, which he also manages quite well. The figure of the policeman Max, eaten away by feelings of revenge and ambition, is not quite as interesting as the one in the films mentioned. Yet McAvoy has a presence strong enough to make Max more than just a cliché-filled decal.

But also thanks to the other actors like Mark Strong, Andra Riseborough ("Oblivion") or David Morrissey ("The Walking Dead") "Enemies - Welcome to the Punch" has become absolutely worth seeing even in its weaker moments. If you don't expect any big surprises and just want to experience an entertaining cop-thriller with good actors and a captivating visual language, you should definitely take a look at this successful work. Worth seeing!

image + sound: The Blu-Ray's image is absolutely clean and has a very good overall sharpness, which also brings out smaller details well in dark scenes. The colour scheme seems a bit undercooled, but this underlines the stylish look of the film. The DTS-HD 5.1 Mix provides a lot of movement on the surround channels, especially during the various shootouts and chases, but at the same time transports the dialogues out of the speakers in a clear and understandable way. Good!

Extras: As a bonus there are some uncommented B-Roll recordings (approx. 18 min.), the trailer and nine interviews with the director, the producer and some actors (approx. 29 min.). Unfortunately, no German subtitles are available for the bonus features, which is why only interested viewers with a good command of English can enjoy the additional material.

Fazit: "Enemies - Welcome to the Punch" is a first-class, stylishly staged thriller with some good action sequences and an exciting story. Director Eran Creevy can't really take a new look at the genre. But apart from a few smaller lengths, his film offers 100 minutes of entertaining entertainment that friends of contemporary cop thrillers shouldn't miss. Recommended!