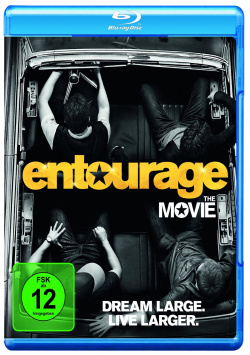 Film: Actually everything looked like a happy ending: Vince (Adrian Grenier) got married, Ari (Jeremy Piven) retired in order to save his marriage and the rest of the gang also did well for a change. Yet Vince's marriage lasted little longer than Aris's retirement. Now the former agent runs a studio, for which Vince wants to realize his first directorial work - a modern version of the story around Dr. Jekyll and Mr. Hyde. Eight months later the shooting is almost finished. But since Vince is running over the budget more and more, not only him, but also Ari is threatened by the end. While Eric (Kevin Connolly) tries everything to calm the waves, Ari has to beg a wealthy financier (Billy Bob Thornton) for millions more for the studio's prestige project. But there is only more money if the film is also good for something. And so the heavily rich Texan sends his son Travis (Haley Joel Osment) with Ari to L.A. to look over Vince's shoulder. And the already nervous superstar is not at all pleased about that…

From 2004 to 2011 Vincent "Vince" Chase and his "Entourage" gave the Pay-TV channel HBO good odds. Based loosely on producer Mark Wahlberg's experience as a young actor in Hollywood, the series was nominated for a total of 17 Emmys and 9 Golden Globes, with Jeremy Piven in particular taking home Vincent's choleric Agent Ari awards. With the last episode of the eighth season the series was actually given a round finale. Nevertheless, the fans and producers always wanted more stories about Vince, E, Turtle, Drama, Ari and Co.. This wish has now been heard in the form of a cinema film, which follows the series finale almost directly.

No question: whoever loved the series will also like the cinema film. Because basically the cinema version seems like a compilation of four series episodes. The possibilities of cinema were actually only exhausted with the somewhat more prominent guest stars and the spectacular excerpt from the fictitious film-in-film "Hyde". Otherwise "Entourage" for the big screen is exactly what "Entourage" was for television. The story is nice and offers enough possibilities for nice gags and insights into the beautiful glow of Hollywood. Beautiful people with attractive bodies, luxury villas and a lot of prominent faces from show business and sports cavort around Vince and his friends.

While the fight for the completion of "Hyde" is undoubtedly the main plot, E, Turtle and Drama also get their own little storylines: E becomes father, but is no longer involved with the highly pregnant Sloan (Emmanuelle Chriqui). He seems to enjoy life as a single - but secretly he is still very attached to his big love. Turtle, on the other hand, falls for the famous wrestler Ronda Rousey and really gives everything for a date with her. And drama finally gains unprecedented popularity when a video appears on the Internet showing him masturbating. However, he didn't wish for this kind of fame.

The movie also gives these smaller subplots enough time to unfold, so that fans of all characters get their money's worth. And also other figures, which one has become fond of in the course of the eight seasons, are to be seen in partly short guest appearances, among them Billy Walsh, Lloyd, Shauna or Dana Gordon. All this makes the "Entourage" film a gift for fans. If you don't know the series or weren't particularly enthusiastic about it, you won't be able to do much with this look behind the scenes of the dream factory. All in all, there's one very clear thing: Absolutely worth seeing!

Picture + sound: Technically, the film presents itself from its best side at the Blu-ray. The picture is absolutely clean, the colour scheme is very harmonious and the matching of contrasts and black values ensures the right atmosphere not only in the brighter outdoor shots, but also in darker scenes. The English soundtrack with a very lively DTS-HD Master Audio 5.1 mix scores particularly well when it comes to sound. But also the German Dolby Digital 5.1 soundtrack is powerful enough to leave a positive overall impression. The isolated good surround moments that are achieved by the soundtrack, atmospheric ambient noises and smaller sound effects also help. Good!

Fazit: "Entourage" is a successful continuation and also a round conclusion of the popular HBO series. Even though the movie looks more like a compilation of several episodes of a series than like a big movie, fans get their money's worth. The Blu-ray presents the movie in very good picture and sound quality and also offers some nice extras. If you loved the series, you simply can't get past this disc. Recommended]