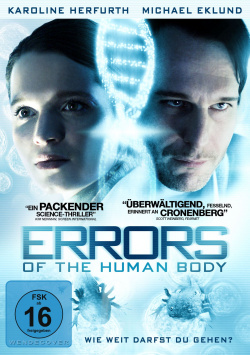 Errors of the Human Body - DVD

Film: The death of his son has thrown the once celebrated scientist Geoff Burton (Michael Eklund) completely off track. Completely obsessed with finding a cure for the genetic defect that killed his son, he explores such controversial paths in his research that he is on the verge of completely destroying his reputation in his homeland. When he receives an offer to work at the Institute for Genetic Engineering in Dresden, he leaves the USA without hesitation, as he is convinced that fewer obstacles will be put in his way in Germany. But even here he is quickly caught up by his past, as his former assistant and lover Rebekka (Karoline Herfurth) also works in the institute. She is on the verge of a groundbreaking discovery that could bring Geoff closer to his goal. But he is convinced that her dubious colleague Jarek (Tómas Lemarquis) has secretly appropriated the research results and wants to complete them with illegal means to reap the rewards. In his attempts to prove this suspicion, Geoff is increasingly caught in a maelstrom of suspicions, intrigues and paranoia. Is there really a conspiracy going on or is it all taking place in his confused mind?

"Errors of the Human Body" is, after some award-winning short films, the feature film debut of the Australian director and screenwriter Eron Sheean. The atmospheric science thriller was shot at the Max Planck Institute in Dresden with an international cast. In addition to Michael Eklund, who last appeared in the Halle Berry thriller "The Call", Karoline Herfurth, the Briton Rik Mayall, the Icelander Tómas Lemarquis, who lives in France, and the Spaniard Ivan Gonzalez stood in front of the Australian's camera. A truly international production, revealing great potential right from the start.

Due here Sheean succeeds very well in translating Burton's feeling of despair, loneliness and obsession into atmospheric images. The undercooled, menacing atmosphere he creates in the scenes at the institute is reminiscent in its best moments of the 70s medical thriller "Coma" with Michael Douglas. In addition, the subject of genetic research is extremely interesting and offers the perfect material for such a thriller. The good play of the actors also ensures that a consistently positive impression is created at first.

However, this cannot be completely maintained to the end. Even though the atmosphere remains rousing throughout, the story loses itself more and more in the confused world of the main character's thoughts and leaves the viewer a bit helpless more than once. Moreover, the tension, which is really well built at the beginning, is almost completely lost by the rather disappointing resolution towards the end. What remains are some engaging pictures and interesting ideas. As a drama about a once brilliant scientist, who seems to lose his grip in reality because of the grief over the death of his son, "Errors of the Human Body" has become a quite good and worth seeing movie. As a science thriller, which he wants to be, the movie can only really convince in the first half. Therefore, there is only one: worth seeing with some exceptions!

Picture + sound: The picture of the DVD provides with a good image sharpness and a slightly subcooled color scheme for an atmospheric realization of the story. Only in the darker scenes some small weaknesses can be detected in the detailed portrayal. The sound for the German language version can be selected between a Dolby Digital 5.1 mix and a dts track. Both have only a few really powerful sourround moments to offer, but they are pleasantly atmospheric, whereby the dts mix lets the ambient noise come into its own a bit better. Good!

Extras: As a bonus the DVD offers only a short interview with the director, as well as the original trailer and further program tips of the provider.

Fazit: "Errors of the Human Body" is an atmospheric science thriller that reveals good dramatic and acting potential at the beginning, which is unfortunately weakened by the somewhat confused story development towards the end. Nevertheless, the atmospheric visual language and the game by Michael Eklund, which won a Leo-Award in Vancouver, make sure that the thriller at the end is still worth seeing, at least as a drama, despite its weaknesses. The DVD presents the film in good picture and sound quality, only the additional material is a bit lean. Recommended!