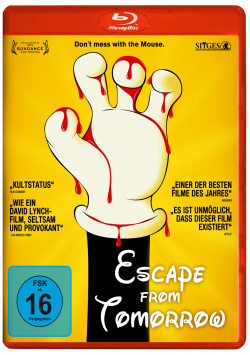 Film: It's supposed to be the best time for Jim (Roy Abramsohn), his wife Emily (Elena Schubert) and their two children when they visit the world's most popular amusement park. But already when Jim receives his notice by phone on the morning of the last day of vacation, he suspects that this day will be anything but happy. And indeed Jim drifts into strange daydreams again and again and loses more and more control over his mind. Soon he can no longer tell what reality is or what he imagines. Do the princesses in the park really earn anything as noble prostitutes? Who are the two young French women who have turned his head and whom he keeps running into? Did his son's eyes really turn black? And what's going on behind the scenes of "Neuland"? And so what began as a happy family holiday becomes a real horror trip, which Jim apparently can't escape any more...

"Escape from Tomorrow" is a film whose story is actually much more interesting than the finished product. Admittedly, director Randy Moore did not get permission to shoot in Disneyland. And so he, his actors and his small team had to secretly shoot, always accompanied by the fear of being unmasked by the security staff or one of the countless surveillance cameras and expelled from the amusement park. And even when all the scenes were in the box, publication was by no means a matter of course. The fact that Moore and his cameraman succeeded in creating many very atmospheric pictures despite the guerrilla tactics and that the film doesn't look like another found footage work in most scenes is just as much of a miracle as the fact that the film could now be released without legal disputes. The black-and-white look is a good antithesis to the overstyled and colorful Disney world, which makes the film look like a very bizarre nightmare version of a visit to the theme park right from the start. Influences from other filmmakers like David Lynch are clearly noticeable here.

Some scenes were shot afterwards in front of a green screen. The inserted backgrounds seem to be very artificial, which somewhat diminishes the very special effect that the secretly shot scenes offer. Moreover, the story gets more and more confusing, which could become too exhausting even for many open-minded viewers at some point. But even though the movie is far from being perfect, it's worth watching it not only because of its really adventurous genesis. Moore's surreal satire is a disturbing, challenging trip that you won't forget. A strange, interesting and in many ways also unique film - and therefore absolutely worth seeing despite its weaknesses!

strong>Picture + Sound: The clean picture of the Blu-ray pleases with its very atmospheric black and white look. Also the sharpness of the pictures can be convincing in most moments, only in some moments, when the shots obviously had to be made hidden, there are visible weaknesses. The DTS-HD Master Audio 5.1 mix remains very unspectacular over long distances. There are many scenes that do without dialogue and only get along with very discreet music or ambient noises. The surround channels are used again and again, but really powerful effects can only be heard very occasionally. Good!

Extras: As a bonus the Blu-ray has two audio comments on board. The first one is directed by Randy Moore and his cameraman Lucas Lee Graham. This rather technical commentary reveals much about the unusual way in which the film has been staged, which makes this commentary extremely interesting. The second one is also worth listening to, as the two main actors Roy Abramsohn and Elena Schubert slip into their film roles Jim and Emily again. But what starts off amusingly wears off at some point. The fact that there are always longer pauses during the conversation between the two also makes this commentary rather tenacious and hard to get along with, especially in the second half of the movie. The first half hour can be listened to by interested fans of the film.

Really interesting, but unfortunately a bit too short, is the 15-minute Making of, in which the legal advisor of the film talks about how he could avoid legal consequences for Moore and his team. You can also find out how the leading actors reacted when the security service actually became aware of them. In addition to this worth seeing featurette, the disc also has an animated poster gallery and the trailer on board. Good!

Result: "Escape from Tomorrow" may not be a perfect film, but it is a very interesting one - and that's a very positive one. The surreal psycho-trip through Disneyland may be a bit confusing and exhausting, but it's also extremely unusual and disturbing. Even though its genesis is more exciting than the film itself, the reputation for friends of challenging arthouse food with a touch of David Lynch is definitely worth it. The Blu-ray presents the film in atmospheric picture and sound quality and with two audio commentaries and a short but very worth seeing Making of also has good extras on board. Recommended!