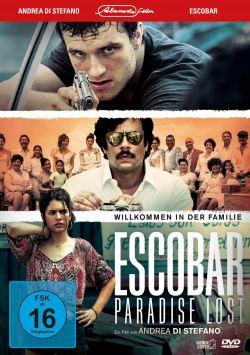 Film: Nick Brady (Josh Hutcherson) and his brother Dylan (Brady Corbet) dream of paradise. Together they want to open a surf school on the Colombian coast. Surfing, relaxing on the beach of your dreams, simply enjoying life - this is what your future should look like. Although they clash with a gang right at the beginning of their stay, they do not want their dream to be destroyed. And especially for Nick he seems to become true faster than he thought when he meets the beautiful Maria (Claudia Traisac) and the two fall in love immediately. That Maria is the niece of the infamous Pablo Escobars (Benicio del Toro) does not worry Nick at first. Even when the nice uncle takes care of the problem with the gang, the young Canadian still sees no danger in it. But the closer his relationship with Escobar gets, the more he gets involved in the unscrupulous machinations of the Medellin cartel. To want to get out there again could have deadly consequences not only for him, but also for his brother and Maria…

With his directing debut "Escobar - Paradise Lost", actor Andrea di Stefano delivers a very special gangster thriller. He lets fictitious persons like Nick and Maria live through a nightmare of a particularly terrible kind against a real background. He is not interested in staging a kind of biopic about Pablo Escobar. Rather, he uses facts, but also legends, to tell an exciting story between romance and thriller. He traces in a thrilling way how a carefree young man falls under the spell of a powerful drug baron, how he succumbs to the fascination of life that the "Patrón" gives them before they realize how high the price is that they have to pay for it.

The film consists of two parts. The first part is a flashback to getting to know Nick and Maria, to the first meetings with Uncle Pablo and a supposedly harmonious time, over which only slowly dark clouds rise. The second part plays a few months later. The situation threatens to escalate here and Nick wants to flee Colombia with Maria. But before that he has to experience a job for Escobar that quickly brings him to his moral limits. But he knows that it is his only chance to actually escape this hell. The whole thing culminates in a furious finale, which can offer some extreme moments of suspense.

Admittedly, the story is marked by its fictional character. In some moments she already seems a bit constructed. And also those who expect to learn something about the person Pablo Escobar and about the Medellin cartel will surely be disappointed. However, this doesn't change the enormous tension that is being built up in the second half of the film. The atmospheric camera work and the intense play of an outstanding Benicio Del Toro also console us over possible dramaturgical weaknesses. In addition to Del Toro, who clearly dominates every scene in which he performs, "The Tributes of Panem" star Josh Hutcherson is also more than solid.

"Escobar - Paradise Lost" is a gangster epic in the classical sense, which changes from a tender love story to a deadly cat-and-mouse game and can score with great actors and atmospheric locations. Not a masterpiece, but convincing in almost all points. And there is a very clear one for that: Worth seeing!!

Picture + sound: The picture of the DVD captivates by a high picture sharpness, which also lets many smaller details come to the fore very well. The colouring is very atmospheric, dirt or other visible weaknesses are not recognizable. The sound shows its strengths especially in the action sequences. In addition to the well mixed dialogues, sound effects such as shots or squeaky car tires provide powerful movement in the surround area. Good!

Fazit: "Escobar - Paradise Lost" is an exciting gangster epic that changes from a tender love story to a deadly cat-and-mouse game and scores with great actors and atmospheric locations. The DVD presents the film in atmospheric picture and sound quality and also has extensive extras such as a very good making of to offer. But there is a very clear one: Recommendable!