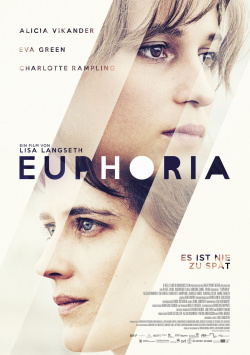 For years the sisters Ines (Alicia Vikander) and Emilie (Eva Green) had no more contact with each other. But then the successful artist Ines receives an invitation from her sister to travel Europe together. Not knowing what to expect, she is initially very suspicious of Emilie. This only changes when they reach their destination: a beautiful property, isolated on a remote clearing. When she learns why she invited Emilie here, her distrust turns into anger. Only gradually do the sisters seem to be able to approach each other here - but whether Ines can really understand Emilie's plans seems questionable…

With her first English language film, the drama "Euphoria", Swedish filmmaker Lisa Langseth dares to venture into difficult terrain. She has embedded the story of an attempt to bring two completely alienated sisters closer together in a very unwieldy, depressing story that stands in stark contrast to the enchanting landscape of the Bavarian forests in which the film was shot. In long conversations the relationship to the father, the death of the mother or Ines' isolation from the family is analysed. That's great played and elegantly filmed. The script and the very melancholic staging, however, destroy any form of entertainment value.

Maybe the movie doesn't want to entertain you, but only to make you think about life and death. But also other movies have managed that much better and more touching. The problem with "Euphoria" is that despite its intensely acting actresses it remains emotionally undercooled. Langseth doesn't succeed in making the characters of her story accessible to the viewer. And that is really fatal with such a story. Because the drama is exactly what it shouldn't be with such a topic: No matter.

Naturally you are made to think even if you don't feel with the characters. And yes, the heaviness that weighs on you after watching the film is definitely due to the creation of a strong atmosphere. But it would have been nice if the great performance of Eva Green and Alicia Vikander had also been supported by a more emotionally stirring production. Because in "Euphoria" only frustration and no euphoria comes up. Only worth seeing with clear cutbacks!