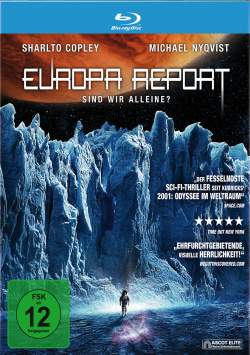 Content: As under the mighty ice layer of the Jupiter moon Europe a huge ocean is suspected, which could contain traces of life, the "Europe One Mission" tries for the first time to send a manned spaceship into the depths of space. On the Jupiter moon, the team will investigate some unusual heat zones observed there. But just before the ship reaches its destination, the contact breaks off. Sixteen long months, there's no sign of life from the crew. Just when the leading organisation Europa Ventures wants to declare the mission a failure, they receive new signals from Europe One. There are many hours of video footage documenting the last days of the crew. It is deeply disturbing material that shows how an accident almost caused the crew to abandon the mission and what happened when they decided to land on the Jupiter moon. A fatal decision?

With "Europa Report" the director Sebastian Corbero from Ecuador has staged a quite minimalistic but extremely effective SciFi thriller, which is somewhere between "Moon", "Gravity" and "Blair Witch Project" and proves that you can also create great tension with simple means. The film itself is presented as a mixture of documentary and found footage thriller. In interviews, Dr. Samantha Unger (Embeth Davidtz), the head of mission planning, tells viewers about the planning of the project, the difficulties, the interruption of communication and the receipt of the video material, which makes it possible to understand the fate of the crew. The rest of the film is a mixture of video diaries of the crew members and recordings of the various cameras inside and outside the shuttle and on the helmets of the astronauts.

Stylistically this is not new territory. However, Corbero manages very well to use these well-known elements in such a way that they create an oppressive atmosphere, which makes this almost chamber play-like thriller extremely thrilling despite the many very quiet, dialog-heavy scenes. If you expect great effects or rousing action, you will certainly be bitterly disappointed. For although there are some visually very engaging sequences, "Europa Report" is first and foremost a psychological thriller that actually deals only superficially with the question of whether we are actually alone in the universe.

With Sharlto Copley ("Disctrict 9") and Michael Nyqvist ("Millennium" trilogy) two extremely strong actors could be engaged, who also deliver very strong performances in a rather minimalistic style. And the rest of the international cast also delivers performances that more than do justice to the staging style of this unusual science fiction film. The relatively small budget that Corbero and his crew had to make do with is noticeable here and there. But all in all, he has managed to transform the financial limitations into one of the movie's biggest strengths. Because instead of concentrating on extremely expensive effects, the focus here could be on the development of the characters, the story and the atmosphere. And that makes "Europa Report" a really intense, exciting and extremely worth seeing film! Friends of more sophisticated SciFi dramas should not miss this mission.

Picture + sound: Technically there's hardly anything wrong with Blu-Ray. The image is absolutely clean and the sharpness is very high in many moments. Due to the documentary style of the film, here and there stylistic effects such as picture disturbances, noise or blurriness are used, which are not really weak points, but should support the atmosphere of the event. This also applies to the often rather undercooled colouring. It captures the threatening, oppressive mood that is increasingly prevailing on board the shuttle. The sound is mainly dominated by dialogues and smaller, but extremely atmospheric sound effects. Also here there is really no reason to complain, why there is a more than deserved "Very good"!

Extras: As a bonus there is a short making of to the visual effects, picture galleries to the shooting and alternative poster designs, as well as text boards with background information, the trailer and further program tips of the provider. Not really gorgeous, but for a small production like this one it's fine!

Fazit: "Europa Report" is an atmospheric and despite its tranquility very exciting science fiction thriller, which proves that viewers can be entertained even without big effects fireworks and fast action - if the story is right. And that proves to be not only the good actors, but also the great strength of a rather unusual work, which presents itself on Blu-Ray in a very appealing audiovisual implementation. Lovers of quiet, rather demanding SciFi entertainment absolutely recommendable!