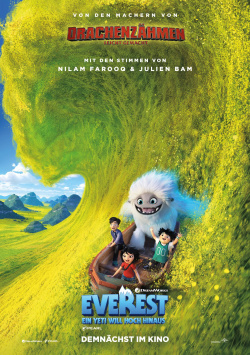 Since the death of her father, the girl Yi has completely withdrawn into her own world. She works every free minute to earn enough money to visit all the places she wanted to go with her dad. In her small hiding place on the roof of a residential building in Shanghai, she dreams of a journey until she discovers an uninvited visitor: a frightened little Yeti hides from the henchmen of Burnish, who is very wealthy and wants to prove the existence of the Yeti at all costs with the help of zoologist Dr. Zara. Together with her friends Jin and Peng, Yi embarks on a dangerous journey to the Himalayas to bring the Yeti "Everest" back to his family…

The American-Chinese co-production "Everest - A Yeti Wants High" may not win a prize for originality as far as the story is concerned. The course of the plot is very predictable and the characters are drawn in a rather stencil-like way - even those who suddenly unfold their true character in the course of the movie. Again and again you feel reminded of other movies, from which many a set piece was all too obviously borrowed. And yet: What the animated film lacks in dramaturgical originality, it makes up for with a lot of humor, even more heart and a very imaginative visual realization.

When Everest unfolds its magical powers, it always creates magical moments that are really wonderful to watch thanks to the work of the animation team. Director Jill Culton, who also wrote the script, doesn't just rely on such powerful fantasy elements, but also takes time for more quiet moments, in which the charm of this family film can fully unfold. The fact that Yi's violin playing and her very special relationship to her instrument can play an important role in the story gives the film a very special character despite many well-known elements, which supports the already positive overall impression even further.

To this comes of course the fact that you just have to like the cuddly Yeti Everest, but also Yi and her friends. You quickly take these characters into your heart, which makes the movie very effective on an emotional level, especially towards the end. "Everest - A Yeti wants to go high" is an exciting, but also very funny animation adventure for children from 6 years on, in which adults can also have a lot of fun. A movie that entertains the whole family and really gets to the heart. If you like animated films like "Dragon Taming Made Easy", you'll love this Yeti adventure as well. Absolutely worth seeing!