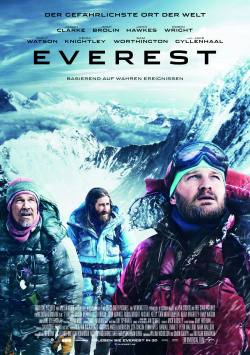 For many mountaineers and adventurers Mount Everest is a myth and a challenge they would like to face at some point in their lives. Although many people have lost their lives trying to climb the summit 8,848m above sea level, there are always attempts to conquer Everest. In May 1996 two teams try to reach the summit. Under the leadership of experienced mountaineers Rob Hall (Jason Clarke) and Scott Fischer (Jake Gyllenhaal), a total of more than 30 mountaineers dare to embark on this dangerous expedition. Whether the pathologist Beck Weathers (Josh Brolin), the postman Doug Hansen (John Hawkes) or the journalist Jon Krakauer (Michael Kelly) - as different as these people may be, they all share a dream. And he then lets them accept the dangers that threaten them. But both Hall and the fishermen are always anxious to keep these dangers as low as possible. When they leave base camp on the morning of 10 May in bright sunshine, everything looks like perfect conditions for reaching the summit. But when they reach it, the weather changes suddenly and now a life-threatening descent begins, which could very quickly end in a catastrophe...

Based on true events, "Everest" has become a truly gripping drama in front of an impressive natural backdrop. The film was shot in the high mountains on the trek to Mount Everest in Nepal, in the Italian Alps as well as in the legendary Cinecitta Studios in Rome and the Pinewood Studios in London. The difference between the scenes shot on location and those shot in the studio can certainly be seen on closer inspection. But the good visual effects, the spectacular 3D implementation and the gripping story make sure that this little weakness hardly matters.

Director Baltasar Kormákur ("2 Guns") closely followed the facts of the May 1996 disaster in his film. But even those who do not yet know the outcome of the story will quickly be able to guess it. Despite his dramaturgical closeness to reality, Kormákur always reaches deep into the clichéd box of common catastrophe films, so that even small scraps of dialogue are enough to seal the fate of individual characters from the very beginning. Subtleness is not exactly the strength of the staging. This eventually leads to the characters remaining a bit too one-dimensional and their fate not moving the audience as it should be the case.

That doesn't change the fact that "Everest" offers the viewer really nerve-racking tension especially in the second hour. After a somewhat tough introduction to the story, the events with the ascent to the summit and the approaching thunderstorm take on extremely dramatic and stirring traits. Even if the plot doesn't offer any real surprises here, the viewer is still pressed into the cinematic armchair with tension all the time. The picture depth, which is reached by the good 3D effects, intensifies this still clearly.

"Everest" is dramaturgically no masterpiece. But the great cast, the breathtaking landscape shots and the atmospherically dense staging easily make up for most of the weaknesses. The bottom line is that you get first class tension cinema and a thrilling drama in front of an impressive backdrop, which once again makes it clear that man should never lose his respect for nature. That's what it's all about: Absolutely worth seeing!