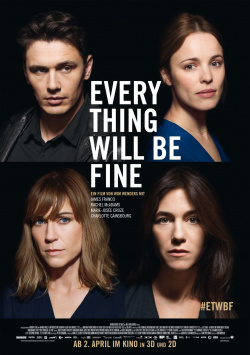 Every Thing will be fine

A brief moment changes the lives of writer Tomas (James Franco) and single mother Kate (Charlotte Gainsbourg) forever. There are only a few seconds in which a sled races in front of Tomas's car. A few seconds that cost the life of one of the two boys on the sleigh. Plagued by feelings of guilt Tomas falls into a deep crisis of meaning, which also breaks his relationship to Sara (Rachel McAdams). As he tries to find support in writing, Kate tries to be a good mother to her traumatized son Christopher despite her grief. While Tomas slowly manages to give his life a meaning again and to process the events, Kate and Christopher seem to succeed only with difficulty. Driven by the need to finally understand what happened on this fateful evening, the boy tries to contact Tomas many years after the accident. But is he really ready to face this trauma again?

With "Every Thing will be fine" director Wim Wenders has delivered his first drama in 3D. In terms of content, the somewhat tough trauma and grief management actually offers little that is new. With long, calm shots, in which the actors' facial expressions, marked by a difficult fate, rather than the dialogues speak, Wenders guides his viewers through the several years of action. With symbolically pregnant images and a depressing atmosphere, the award-winning filmmaker successfully fights against potential boredom time and again. Although in principle not much happens after the tragic accident, you as a viewer are quite spellbound by the story. With a sensitive hand, Wenders stages a misfortune that shatters the audience and makes them feel sympathy with all those involved, precisely because of its restrained implementation. Therefore, one would also like to know if and how they can cope with what they have experienced and the indescribable loss - always in the hope that Wenders may give his protagonists some form of salvation and thus a happy future.

However, this emotional intensity of the initial situation cannot prevent some lengths from arising during the two hours of the film. Especially in the middle part the staging is tormented by some extremely tough moments, against which even the intensity of the pictures can't do much anymore. Wenders has tried to add depth and strength to the visual layer by using 3D. But this project was not really successful. Since most scenes take place in dark or very dark surroundings, the image is darkened by the 3D glasses, depending on the quality of the projection. The enjoyment of the film, which isn't exactly pleasant because of the difficult subject, is made even more exhausting by this. In the bright scenes it becomes clear what Wenders wanted to achieve with the decision to shoot the drama in 3D. However, in many cinemas the technology unfortunately puts an end to this project.

No question, "Every Thing will be fine" has some very strong moments, successful aspects and comprehensible ambitions. But the end result is very bulky, sometimes also for mind and eyes very exhausting Arthauskino, which unfortunately is not as groundbreaking as it would like to be. Therefore: only worth seeing for patient turning lovers!

Kino Trailer zum Film "Every Thing will be fine (Deutschland/Kanada/Schweden/Norwegen 2014)"
Loading the player ...