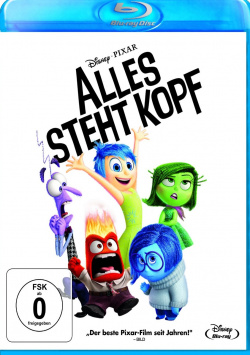 Everything is upside down - Blu-ray

Film: Have you ever wondered why you sometimes feel sad although you don't know exactly why? Or why do certain things make you happy and make you laugh? Why do you disgust with some things and make others really angry? The answer lies directly in your heads in the control center. Here joy, fear, disgust, sorrow and anger combine forces to keep your emotional balance in order. This is also the case with eleven-year-old Riley, who has always been happy to do most of the work. But then the girl and her parents have to move to the big city and suddenly the emotions go crazy. Joy still succeeds in preventing grief from wreaking complete chaos. But when both of them are washed away by Riley's mind in an accident together with important core memories in very remote regions, fear, disgust and anger have to hold their ground at headquarters. And that has catastrophic consequences, which joy can only stop if it succeeds in time to find its way back together with sorrow…

Whenever the PIXAR Studios release a new film, the critics usually flash over with superlatives. With a few exceptions, such as the "Cars" films, the works from the PIXAR smithy are not only extremely popular with young and old cinema-goers, but are also absolute favourite with critics. And rightly so, since the films regularly manage to reach an audience of all ages and tell really beautiful, multi-layered stories. With "Finding Nemo", "Ratatouille", "Wall-E" or "Toy Story 1-3", the studio has created numerous classics of modern animated film. Hard to believe that the ingenuity and creativity experienced in these films can be increased. But with "Alles steht Kopf" director Pete Docter ("Top"), his co-director Ronnie del Carmen and the entire creative team have once again surpassed themselves.

The idea of looking inside a person's head and letting the emotions appear as figures is not really new. The 90's sitcom "4x Herman", for example, used a very similar premise, where mind, love, fear and lust were the control center in the brain. But even if the initial situation is not new, the implementation of the story is truly unique. The ingenuity displayed here is as fascinating as the various worlds that the makers have invented for the interior of the human mind. The viewer learns in a playful, original and incredibly funny way how to get a catchy tune, why teenage boys often don't get a word out when they see a girl or why certain memories are simply deleted at some point.

Trying to describe what makes this film so special on a visual level alone is almost impossible. It is just as impossible to discover the many small details that have been incorporated here with unique prestige. "Everything is upside down" is predestined to be experienced again and again. What is much better described is the emotional level on which this wonderful work works. Docter's script doesn't only manage to capture the emotional inner life of a little girl in an excellent way. Rather, there are a lot of observations in the story, in which really every viewer can find himself. This is usually very funny, but sometimes extremely touching and sad. There are probably very few who don't shed at least a little tear in a scene in which a farewell to a certain part of childhood is thematized. During the press screening, several adults were observed to have picked up a handkerchief as inconspicuously as possible - including the author of these lines.

"Alles steht Kopf" proves once more that the prejudice that animated films are pure children's stuff is no longer true - especially not for PIXAR films. There are a lot of jokes and ideas that children are not yet able to grasp, while there are other scenes in which especially the little ones can laugh heartily. And that's exactly what makes a good family film, namely that it offers entertainment for everyone, albeit on different levels.

If there's something that disappoints here, it's the supporting film. Visually, the musical background is extremely annoying and the story, although quite cute, is a bit unimaginative. PIXAR has already done a lot better. But as far as the main movie is concerned, there is nothing wrong with it. One of the best animated films of recent years and undoubtedly one of the most beautiful films of 2015. But there is a very clear one: Absolutely worth seeing!!!!!!

picture + sound: The audiovisual quality of Blu-ray is outstanding. The absolutely clean picture with its very high overall sharpness lets the many small wonderful details of the movie come to the fore very well. The colours are mixed very powerfully and there is also nothing wrong with the balance of contrasts and black values. The sound is available in the German version in a powerful Dolby Digital 7.1 mix, which already fills the surround channels with life to such an extent that the comparison with the somewhat more lively English DTS-HD MA 7.1 track is not really disappointing. All in all, there is a clear one for the technical implementation of the film: Very good!

Extras: While the DVD has hardly any bonus material to offer, there are at least a few extras on the 2D Blu-ray. But the full pack is only available on the much more expensive 3D Blu-ray, which has a complete bonus disc to offer. Buyers of 2D Blu-ray have to make do with the short film "Lava" (7:12 min.), the brand new short film "Riley's first date" (ca. 4:40 min.), as well as featurettes about the women of "Alles steht Kopf" (ca. 11:22 min.) and about "Gemischte Gefühle" (ca. 7:12 min.). There's also an audio commentary by director Peter Docter and producer Jonas Rivera. Not really much, but definitely recommendable for fans!

Fazit: "Alles steht Kopf" is a wonderful film, which looks into the head of a little girl in an imaginative, humorous and also moving way. One of the most beautiful animated films of the last years, which may be a bit too complex for very young viewers, but which also enchants adult viewers very quickly. The Blu-ray presents the colourful hustle and bustle in Riley's head in very good picture and sound quality. The bonus material is clear, but quite ok. Altogether applies here quite clearly: Absolutely recommendable!