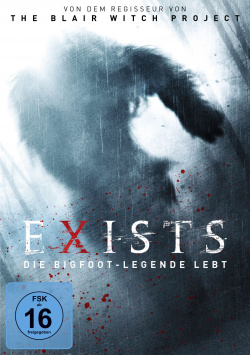 Film: There are myths that simply don't want to die. The Loch Ness monster is one of them, the aliens in Area 51 are another. And then, of course, there is Bigfoot, who alone in the USA since the late 60s over 3,000 people want to have seen. According to experts, the fact that all these people survived the encounter with the hairy forest monster is due to the fact that the Bigfoot itself is a tame creature that only becomes dangerous when provoked. But how dangerous the Bigfoot can become, that the brothers Brian (Chris Osborne) and Matt (Samuel Davis) together with their friends Dora (Dora Madison Burge), Todd (Roger Edwards) and Liz (Denise Williamson) have to experience on a weekend in the woods in a particularly drastic way. For as soon as they arrive at the remote hut of the brothers' uncle's uncle, strange noises and uncanny roar give them goose bumps. When the hobby filmmaker Brian sees a mysterious figure running in front of his lens, he is convinced that he is a real Bigfoot. When the friends' car is destroyed, the others also have to realize that they are dealing with a real danger and not with a backwoods legend. But why is the Bigfoot so incredibly angry?

15 years after he laid the foundation for the enormous success of the found footage subgenre with the "Blair Witch Project", director Eduardo Sanchez once again sets a mystical creature in the woods on a group of young people who then capture these uncanny events with their cameras. And in fact, even after 15 years in "Exists", exactly the stylistic devices that led to goose bumps in the "Blair Witch Project" work really well: The woods are lit by flashlights, where you can hear eerie noises such as the cracking of branches or distant howling. An attack by a creature still invisible to the viewer and the protagonists has already been seen in a similar form in the Found Footage classic.

Naturally, Sanchez can be accused of lacking originality with so many similarities. This horror subgenre is also extremely overused after several imitators and the success of the "Paranormal Activity" series and its free-riders. Yet, despite these justified criticisms, the Bigfoot horror works out well, especially in the first hour, and has some very well done moments of tension to offer. That only changes when you see the angry forest dweller yourself. Of course, the make-up artists did a very good job here with the small budget available to them. And of course the work of actor Brian Steele, who had to squeeze himself into this costume in the warm Texas forests, even in spring, must also be praised. Nevertheless, you can tell from the close-ups that the Bigfoot is made of latex and synthetic hair, which robs him of his threatening nature.

Although the last act might seem a bit disappointing and even unintentionally funny to some viewers, "Exists" has become a very entertaining and at times even really thrilling genre representative, who is always especially effective when he falls back on simple and classic horror effects. And the bottom line is clear: Worth seeing!

Picture + sound: Although found footage films and mockumentaries usually show blurred video recordings, which were mostly taken by qualitatively not perfect recording devices such as surveillance, mobile phone or small hand cameras, "Exists" offers an amazingly good, in some scenes even pleasantly quiet and sharp picture. This can be explained by the use of high-quality digital cameras, which hobby filmmaker Brian brought into the forest. Otherwise, image sharpness, colour mixing and the sometimes slightly overdrawn contrasts are on a level that is absolutely acceptable for such a low budget production. The same applies to the sound, which is determined by the centrally mixed dialogues over long distances, but here and there also provides a good surround feeling and pleasant goose bumps with targeted sound effects such as the uncanny noises from the forest and the roar of the bigfoot. Good!

Extras: For a small production like this the DVD has a lot of well produced extras to offer. It starts with a three-part Making of (approx. 28 min.), in which the spectator can play mice on the set. The pleasantly ad-free view of this production is very interesting and also extremely entertaining. This also applies to the look at the creation of Bigfoot commented by director Eduardo Sanchez. From the first sketches made in New Zealand by WETA, to the finished design and work of the actor who was in the costume, the creation of the creature is discussed here. Finally, there are six edited or alternative scenes (about 15 minutes) on the disc, including an alternative beginning and an extended end. Optional subtitles are offered for all extras. Very good!

Fazit: When "Blair Witch Project" releases a group of young people in abandoned forests on a deadly legend, then it can only get creepy. And this is how "Exists: The Bigfoot Legend Lives" works, especially in the first hour. Only then, when you see the scary monster, some tension is lost. Nevertheless, this Found Footage Horror offers quite good entertainment overall, which is presented on the DVD in adequate picture and sound quality. The really worth seeing bonus material then also makes sure that there is a satisfied "recommendable" DVD at the end.