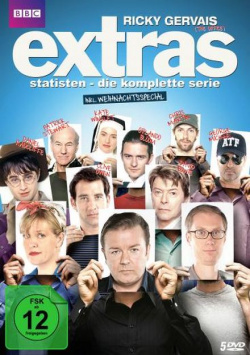 Film: Ricky Gervais and Stephen Merchant made television history with the TV series "The Office". The series has won several awards and is one of the most successful and popular BBC comedies of all time. The US version with Steve Carrell in the leading role has become just as cult as the German version "Stromberg". To create a successor for such a cult product was really not an easy task. But with "Extras" Gervais and Merchant have again proven a very good hand for intelligent comedy. As in office comedy, Ricky Gervais has again taken on the leading role, whereby his Andy Millman is much more likeable than his character from "The Office".

Andy Millman is an extra, but dreams of finally being able to make the big acting career. But neither his useless agent (Merchant), nor his somewhat simple-minded colleague Maggie (Ashley Jenson) are a big help on his way up. Small roles in big film productions are part of Andy Millman's everyday life and he tries again and again to make important contacts on the set that could take him further. The fact that he doesn't leave out any fat cups doesn't make the way to the top any easier. And when he finally gets hold of the dream role in a popular sitcom, he has to realize that success at any price wasn't what he always dreamed of...

What catches the eye first with "Extras" is the caliber of the guest stars. In the first season such illustrious guests as Ben Stiller, Kate Winslet, Patrick Stewart or Samuel L. Jackson will be performing, in the second season Orlando Bloom will be the guest and Harry Potter actor Daniel Radcliffe will provide one of the funniest moments of the whole series. And in the concluding Christmas special (which in contrast to the episodes of season 1 and 2 is only available in the original English version with German subtitles) stars like George Michael, Clive Owen or star chef Gordon Ramsey show their funny side. When Kate Winslet reveals which roles can bring her an Oscar or how to keep the relationship going with telephone sex, when Daniel Radcliffe desperately tries to be a cool Womanizer or when Ben Stiller sounds like an arrogant son of a bitch, then it's simply stunningly funny.

However, in the end it's not the top-class guest stars that make "Extras" so worth seeing, but the excellent interplay of the three main actors and the wonderfully biting humour, which of course doesn't work as well in the German dubbing as in the British original version. The development of the dramaturgy also works extremely well. However, as a viewer you should be prepared for the fact that the humor of the series is replaced by a very melancholic undertone in the course of the second season and especially in the Christmas special. Watching Andy Millman sell himself for success, becoming more and more unhappy, but at the same time appearing more and more arrogant towards his crew and friends, is somehow very sad - even though there are always wonderfully funny little pitfalls hidden here, into which Millman regularly steps.

"Extras" is a satirical look behind the scenes of film and television, a comedy peppered with self-deprecating guest appearances, which in the end reveals a depth that one would not necessarily have expected after the first episodes. Friends of British humour of the more subtle kind should definitely take a look at this beautiful box! Absolutely worth seeing!

Picture + sound: There is hardly anything to criticize about the technical implementation. For a TV production, the visual implementation is absolutely convincing in terms of overall sharpness, colouring and contrasts. Here and there, in darker moments, there are smaller blurs and minimal image noise, but overall such weak points are hardly noticeable. The sound is not spectacular, which is not surprising for a TV comedy. The dialogues are rather centrally mixed, real surround feeling only comes up very rarely. Nevertheless: absolutely satisfactory for a TV series. Good!

Extras: The DVD set has a lot of eye-catching extras, all with optional subtitles. Let's go with the bonus disc to the first season. There are about 70 minutes of bonus material to discover here. A highlight are certainly the almost 20-minute outtakes, during which it is noticeable that Ricky Gervais laughs the loudest about his own failures. When Jude Law, who had been scheduled for a episode, jumped off at short notice, Gervais tried everything to win Leonardo DiCaprio for a guest appearance. Another bonus feature (about 10 minutes) is dedicated to his desperate attempts to even get close to his agent. It goes even more unusual when in "Nigel am Wickel" (approx. 8 min.) it is shown which joke cutter Nigel Williams had to endure by Ricky Gervais. Whether he is put into a romper suit or his face is glued to a nasty grimace with the help of tape, Williams endures the humorous ordeals with much composure, while Gervais has a lot of fun. Finally, there is a featurette about the creation of the series (about 21 min.), as well as edited scenes of all episodes of the first season (about 12 min.)

Continue on the bonus disc of season 2, which has about 100 minutes of extras to offer. Also here we start with some amusing outtakes (about 9 min.), followed by more jokes at the expense of Nigel Williams (about 25 min.). In another short documentary the actors reveal how difficult it is not to interrupt the shooting all the time by laughing and how they mastered "The art of pulling oneself together" (about 14 minutes). Additionally there is a short featurette for each episode with background information about its creation (approx. 49 min. in total).

Finally, the Christmas special, which is not available in a synchronized version, also has some nice extras on board. We start here with a very amusing audio commentary by Ricky Gervais and Stephen Merchant, who talk in detail about the end of the series and have several interesting and amusing anecdotes to tell. Afterwards the two of them answer some questions of the spectators (ca. 15:32 min.). In addition there is a featurette about the work of the real extras of the series (about 12 min.), some distant Big Brother scenes (about 6:42 min.), as well as outtakes (about 6 min.), and two trailers. Very good!

Fazit: "Extras" is an amusing look behind the scenes of the film and TV world from the point of view of an extra who has to give up his ideals for the big breakthrough and is ultimately more unhappy as a star than when he was just a small extra. A comedy that becomes more and more melancholic towards the end, which clearly stands out from the mass of comedy series, not least due to the wonderfully self-ironic guest appearances of stars such as George Michael, Orlando Bloom, Ben Stiller, Kate Winslet, Patrick Stewart or Daniel Radcliffe. The complete box contains the two seasons in German dubbed and in the English original version, as well as the concluding Christmas special in the original with subtitles. There's also over three hours of bonus material. Fans of British comedy series of the special kind should absolutely access here! absolutely recommended!