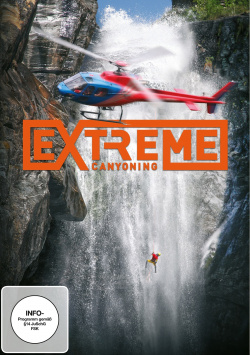 Film: Five enthusiastic extreme athletes, among them two experienced high jumpers, venture on a very special tour in Ticino. Here they want to prove their courage and skills in an extremely daring way in the most exclusive canyoning hot spot. In neoprene suits and equipped with all kinds of important climbing tools, they dare to make their way directly through an impressive gorge, while jumping into the depths with daring jumps again and again to land in small, ice-cold pools. Filmmaker Simon Busch and cameraman Alexander Sass accompanied the five young men on their tour and captured the whole thing as a 3D documentary, which also works well in conventional 2D on the DVD.

Den "Extreme Canyoning" has some really spectacular shots to offer. As a non-extremist sportsman, one wonders again and again whether there are not also some paved hiking trails on which one can walk very relaxed along the gorge and enjoy the great nature. And one is inclined to think that these young men cannot be completely normal when they throw themselves with somersaults into water basins that do not seem to be bigger than a puddle. But when you hear the guys talking enthusiastically about the jumps they just saw in the interviews, you're quickly infected by their enthusiasm.

The pictures of the gorge with its waterfalls, steep walls and tube-like tunnels paired with the spectacular jumps and climbing shots make this documentary a must for all extreme sports enthusiasts. However, there are a few lengths at the beginning. So in the first 10 minutes the equipment is explained in all detail, followed by photographs, which can be called rather "Extreme Walking" and have still nothing to do with that, which begins then finally after scarcely 15 minutes. It is interesting to see what preparations have to be made for such a daring tour. But the staging here is simply too dry and worn out to be carried away by the audience.

As this changes and you are offered some breakneck actions, which can make you dizzy, the somewhat tough beginning quickly falls into oblivion. Even though the recordings and also the editing make clear again and again that the documentation has been set up with relatively small means and therefore cannot be compared qualitatively with comparable more expensive productions, the final result is more than satisfactory. Certainly not a film that can be recommended for imitation, even if there is a weakness and a certain talent for more extreme sports. However, since watching the documentary can cause an adrenaline rush at times, at least the consumption of this documentary can be warmly recommended to all extreme sports fans. Worth seeing!

Picture + sound: Every now and then it becomes clear that the makers do not have the high-quality equipment of more expensive documentaries. During fast pans, jumps or dives there are sometimes small dropouts or other slight picture disturbances and during shots taken against the sunlight, the picture appears somewhat overexposed. Otherwise, however, the visual realization pleases with a high degree of sharpness and a harmonious coloring. The sound shows that the voices are only understandable during the interviews and that they are almost completely swallowed by the ambient sounds (helicopter, waterfall) in the snapshots. A subtitle option would therefore not only have been desirable because of the sometimes very strong Swiss dialect. Apart from that, the Dolby Digital 5.1 soundtrack is absolutely sufficient for a sports/nature documentary. Good!

Extras: As a bonus there is only a slideshow with pictures from the movie and a trailer from the program of the provider.

Fazit: "Extreme Canyoning" is an extreme sports documentary with some really great shots, but also with some smaller lengths. But those who can overlook the somewhat sluggish beginning and some interview sequences that are too long will be rewarded with such spectacular and breakneck actions, which, in combination with the breathtakingly beautiful natural scenery, provide a thrilling viewing pleasure. At least for outdoor fans and extreme athletes an absolutely recommendable DVD!