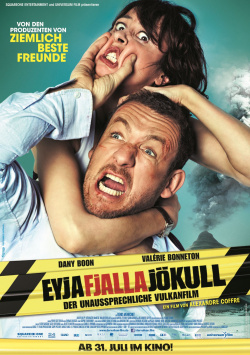 Alain (Dany Boon) and Valérie (Valérie Bonneton) also had to experience how close love and hate can be to each other. Since their divorce more than 20 years ago, the former lovers have been spinning enemies. And even after all these years there is little that changes. When their daughter Cécile (Bérangère McNeese) wants to marry on Corfu, the two squabblers set off independently for Greece, only to land in the same plane. And even before a polite "hello" was exchanged, the quarrels start again. But just when it looks like the situation can't get any worse, the eruption of the Icelandic volcano Eyjafjallajökull forces the plane to make an unscheduled landing in Munich. If Alain and Valérie want to make it in time for their daughter's wedding, they will have to share the last available rental car. But since they don't succeed in stopping their bitter small war for even a second, the probability increases that the road trip from Munich to Greece ends in a catastrophe, with every kilometre, the Alain and ValéEven those who did not directly feel the effects of the volcanic eruption in 2010 know stories of joys or relatives who were stuck somewhere due to the downright paralyzed air traffic. The ash cloud emitted by the Eyjafjallajökull over Iceland had consequences that could be felt not only in Northern and Central Europe for several days. Taking this event as the starting point for a comedy is basically a very good idea, as an incredible number of potential viewers can identify with the story. The fact that with Dany Boon a very popular leading actor could be won, not only in France, gives hope for a really great fun, which could also work here in Germany really well.

So much should be said: such a catastrophe as the volcanic eruption "Eyjafjallajökull - The Unspeakable Volcanic Film" has not become. Unfortunately, the second feature film by director Alexandre Coffre is not a comedy that adequately exploits its great potential. The turbulent starting situation makes for some nice laughs here and there. But all in all, the completely over-excited play of the actors, an unimaginative story and its extremely high predictability rule the action. If the viewer knows long before the punch line exactly which gag will come next around the corner, and if every original idea is nipped in the bud by a much too exaggerated execution, it is very difficult to serve many successful gags at the same time.

After the involuntary stopover in Munich, Alain and Valérie have to share a rental car and are accompanied the first part of the way to Greece by two friends of their daughter. But they soon leave the car completely unnerved and at this point Coffre should have prevented the spectators from feeling the need to do the same. But since the two main characters aren't really sympathetically drawn and the chaos they leave behind on their trip across Europe lacks any form of charm, the pleasure in this comedy is very limited until the conciliatory finale.

Who likes French comedies in general will surely enjoy the weaker moments of "Eyjafjallajökull - The Unspeakable Volcano Film". But if you still haven't given up hope that Dany Boon will finally deliver a charm and laugh offensive of the "Sch`ti" caliber again, you'll be disabused even on this hectic road trip. Therefore: Only for those viewers who don't expect more than simply knitted comedy entertainment, just worth seeing!