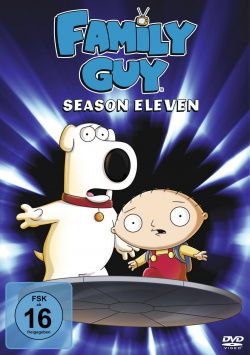 Content: Everywhere morality, immoral behavior, greed, selfishness prevail. But luckily there is still the Griffin family who have been keeping up decency and morals in the small town of Quahog, Rhode Island since 1999. Well, not really. Because "Family Guy", mocked at the beginning as "Simpsons"-clone and even temporarily discontinued, is undoubtedly the most politically incorrect and rudest trick series there is at the moment. Again and again creators (and in the original speakers of various characters) Seth McFarlane ("Ted") and his team deliberately cross the boundaries of good taste to provoke and show all self-proclaimed moral guardians the middle finger. This doesn't always work and has worn off a bit after almost 15 years. But all in all the series is still a lot of fun in the episodes of the ninth season, which are now released as Season 11 Box on DVD - even if the laughter sometimes gets stuck in your throat.

This eleventh DVD box offers a total of 14 episodes on three DVDs. In it Stewie makes his way to the North Pole to confront Santa Claus after he has finished work in a shopping centre before Stewie could tell him his wish. Peter and Quagmire accompany Joe on Halloween patrol, which of course can't go well. And Lois discovers her talent for boxing. Furthermore, Brian and Peter are sentenced, after having rioted in a cinema, to go to the Anonymous Alcoholics, which has fatal consequences for all those present there. Stewie creates a vicious clone of himself that causes all sorts of bloodshed on Spooner Street. Peter tries Red Bull for the first time in his life, to which he reacts quite extremely. President Obama has announced a visit to Meg and Chris' school and Chris is allowed to meet him after writing an essay he stole from Meg. And Stewie is sick and tired of Brian's vulgarities and wants to use his time machine to get back at the dog - and triggers the big bang...

These are just some of the numerous turbulences that provide the Griffins in these fourteen new episodes with the basis for countless, mostly very evil and politically incorrect jokes. There's a musical number about the consequences of alcohol consumption, a splendid side blow on Facebook, a very special performance by President Obama, puppet "Twilight" or a tribute to the opening credits of the "Hulk" TV series. Almost every second, smaller and larger gags are served here. They don't all taste equally good, but all in all the well-done laughs are clearly outnumbered, at least for fans of the series.

Sometimes, however, "Family Guy" shoots a bit too far over the target. If there aren't any really clever jokes about incest, a school amok run or paedophilia, then the feeling arises that the makers simply want to provoke at any price. And that only makes sense if such provocations have something to say and are more than just tasteless vulgarities. There is at least one gag in almost every episode that falls into this category. But from time to time they are more profound than it seems at first and therefore have a certain justification.

So or so you should like humor of the disrespectful, deep black and very coarse kind to laugh about "Family Guy". As in previous seasons, the German dubbing is very keen to translate the wordplay of the original into German. Nevertheless, the English original version is clearly preferable here. But no matter in which language version, if you love the very special humor of Seth McFarlane, you won't get past this box. Recommended!

Picture + sound: The visual implementation of the series is again on a good level with this eleventh speaker. The picture is absolutely clean, the sharpness knows how to convince and - what is especially important for an animation series - the colours are powerful and coherent. In addition to the powerfully mixed dialogues and the music, the sound primarily offers a good use of the front area of the domestic sound system. But from time to time, the multichannel range is also used due to well-inserted surround moments. Good!

Extras: As a bonus there are scenes on the three discs distributed to a total of 13 episodes (approx. 14 min. in total).), as well as three animated storyboards (about 9 minutes in total).

Result: "Family Guy" may have worn out his politically incorrect format a bit. But exploring the limits of good taste and not infrequently crossing those limits is a lot of fun even after 15 years - provided, of course, that you don't feel stepped on your tie by the rough jokes of Seth McFarlane and his team. Fine spirits are put to a hard test here every second, so to speak. And even if some jokes overshoot the mark a little, the fourteen episodes on this eleventh DVD box offer enough good laughs to console over minor weaknesses. An absolute must for fans - just because the truth about the Big Bang is finally revealed here!