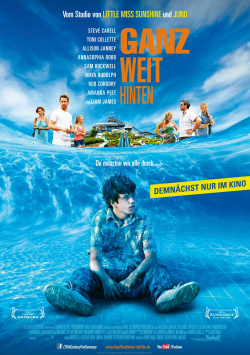 Being allowed to spend the summer holidays by the sea is a real dream for most teenagers. Not so for 14-year-old Duncan (Liam James), who can really imagine something more beautiful than being constantly provoked by Trent (Steve Carell), his mother's new boyfriend Pam (Toni Collette) or being ignored by his daughter Steph (Zoe Levin). The fact that he then also seems to lose all ability to give coherent sentences from his pretty neighbour's daughter Susanna (AnnaSophia Robb) does not make the situation any more pleasant. Only when Duncan meets the casual director Owen (Sam Rockwell) at Water Wizz and starts working there secretly does the catastrophic summer turn out to be a good one - at least for a much too short moment…

Nat Faxon and Jim Rash, who were responsible for their screenplay for the film "The Descendants", have staged a magical Coming-of-Age story with their directing debut "Ganz weit hinten", which with a lot of heart and humor makes sure that even in the dark season the sun laughs for a few moments. Faxon and Rash do not only reveal a very sensitive and exact observation gift, if it concerns the typical worries and needs of a teenager. They also manage to create characters with which viewers like to spend time.

This becomes especially clear in the scenes that take place in Water Wizz. Surely, you could blame the movie for the fact that the lovable employees and especially the seemingly carefree Owen, who never loses his cool spell, are a bit overdrawn. But even if that's the case, it doesn't change the fact that these characters have been drawn so charmingly and charmingly and have been filled with life by the actors in such a way that it's just a great joy to watch the lively hustle and bustle in the amusement park. It is absolutely understandable why Duncan feels so taken care of here, why he really blossoms here and why he believes to have found the family here that his mother with Trent and Steph can't offer him.

"Quite far back" has a lot of puns to offer, which fortunately also remains largely preserved in the German dubbed version. Especially the sayings that Owen makes every second were very well translated into German. The fact that the movie works out so well isn't just because it's very funny. Rather, it is the harmonious mixture of humor, quieter moments and lifelike drama, through which the positive overall impression is achieved. This captivating mixture is supported by an absolutely convincing cast of actors, in which of course Sam Rockwell stands out at first. But on closer consideration, the really unappealing portrayal Steve Carell delivers here is also really great, as he plays more than convincingly against the role type for which he is usually cast. The fact that 18-year-old Liam James ("2012", "The Killing") manages to hold his own against his more experienced and really strong co-stars with a very authentic portrayal in this way must also be praised.

"Far Back" perhaps doesn't tell a really new story. And there may be many set pieces that seem more than familiar. However, when the familiar is presented in such a humorous, adorable and heartwarming way and the viewer gets such a permanent smile on his face that even long after the end of the movie the viewer can't complain about a certain recognition value. If you're looking for the perfect feel-good film of this winter, if you like humorous coming-of-age stories and appreciate the American independent cinema in the style of "Juno", you shouldn't miss this beautiful work. Because qualitatively "far back" is far in front. Absolutely worth seeing!