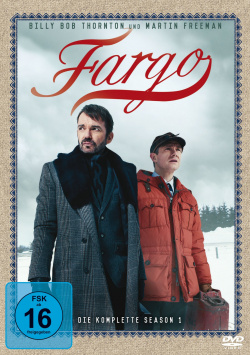 Film: Minnesota in 2006: In the small town of Bemidji, insurance agent Lester Nygaard (Martin Freeman) leads a rather inconspicuous life. But after a collision with the former school hooligan Sam Hess, he ends up in a hospital and meets the mysterious Lorne Malvo (Billy Bob Thornton), who talks into his conscience, Lester decides that he no longer wants to be pushed around. Especially not from his wife, whom he kills in the heat of the moment after another nagging attack. With the help of Malvo, he wants to make the murder look like a robbery. But it doesn't take long before it leads to the next murder. And this is just the beginning of some bloody events in Bemidji. The young policewoman Molly Solverson (Allison Tolman) is convinced that Lester has something to do with the deaths. Against the will of her superior, she investigates against the good citizen of her city and gets help from Gus Grimly (Colin Hanks), a colleague from a neighboring town who had an eerie encounter with Lorne Malvo. But the two of them can do something against an ice-cold killer and an increasingly cunning Lester?

With the two-time Oscar-winning film "Fargo", the brothers Joel and Ethan Coen achieved absolute cult status in 1996. Now the cult film was transformed by screenwriter Noah Hawley into a TV series in which the Coens were also involved as executive producers. It was to be feared, of course, that the story would merely be warmed up and artificially drawn out. Whether that would really work seemed more than doubtful. But already after the broadcast of the pilot most of the doubters fell silent and "Fargo" was quickly celebrated as one of the best TV series of the year (which was finally underlined with two Emmys and two Golden Globes each). The reason for these hymns of praise is quite simple: Hawley didn't just deliver a remake of the movie, but created something quite independent. His series is more of a spin-off of the movie, which is immersed in the same black-humorous-morbid atmosphere that made the thriller so successful at the time.

The series also manages the trick that you can laugh heartily as a viewer, whereas the story itself is really extremely thrilling, especially towards the end. This is also due to the very good character drawing and the excellently selected actors. Billy Bob Thornton, for example, is incredibly good as an ice-cold killer. In some scenes, his deceptive friendliness gives him real goose bumps, making Lorne Malvo without a doubt the most interesting and best character of the first season. But also "Hobbit" Martin Freeman is perfectly cast as an inconspicuous Lester Nygaard, who changes from a harassed slipper hero to a manipulative anti-hero. Both of them are supported by a great ensemble, to which besides Allison Tolman's rediscovery "Breaking Bad" and "Better call Saul" star Bob Odenkirk, Colin Hanks or a wonderfully greasy Oliver Platt belong.

The atmospheric visual language, the cleverly constructed story, the gripping finale and the subtle humour make the TV version of "Fargo" a great cinema. And so it's not surprising that a second season is already in the works, which will play several years before the events of season 1 and will therefore feature a completely new line-up (including Kirsten Dunst and Ted Danson). It will be interesting to see whether the high quality of the first season can be maintained here. The only recognizable shortcoming is synchronization. It is true that the dialogue director has done a really good job. However, for Billy Bob Thornton and Martin Freeman, speakers were chosen who simply don't want to match the original voices and characters at all. Malvo loses some of its threat in the German version, which is really a pity in view of the great performance of Billy Bob Thornton.

You don't have to be a fan of the Coen brothers to like this series. You should just have a soft spot for thrillingly narrated, sarcasm-filled crime food that places more value on characters and dialogues than on action and tempo. Then for this really great first season the following applies: Absolutely worth seeing !!

Picture + Sound: A high picture sharpness, an atmospheric colouring and harmonious contrasts make the absolutely clean picture of the DVD a real pleasure. The sound has some very nice sound effects to offer, which come into their own in the Dolby Digital 5.1 mix. Overall, both the image and the sound help to capture the very special atmosphere of this series. Good!

Extras: Besides some missing scenes (about 9:33 min.) there is an audio commentary (optionally subtitled) on the first DVD about the first episode with author Noah Hawles and Billy Bob Thornton. The two also complete a further commentary on Disc 2, which also contains some edited scenes (approx. 2:52 min.). When commenting on Disc 3, Hawles is then supported by actress Allison Tolman. And also on this disc some cut scenes (approx. 9:50 min.) must not be missing. Disc 4 then has the most extras to offer. Beside the obligatory dropped scenes (about 3:06 min.) there is the two-part Making of "A True Story" (about 27:05 min.), as well as the featurettes "Greetings from Bemidji" (about 16:26 min.) and "Villains and Green Steps" (about 14:14 min.), which deal with further aspects of the production. Good!

Fazit: "Fargo" is a daring experiment that has failed far too often: to inflate a cult film as a series. But the makers of this mini-series have succeeded in turning a good piece of fabric into an independent, outstanding multi-part that doesn't need to shy away from comparison with the original. Outstanding actors (Billy Bob Thornton is excellent), atmospheric locations, bizarre humour and an exciting, nested story full of absurd twists make "Fargo" the best TV entertainment, which is presented on DVD in atmospheric picture and sound quality. In addition, there are some very good extras, which is why this series box should not be missing in any good collection. absolutely recommended!