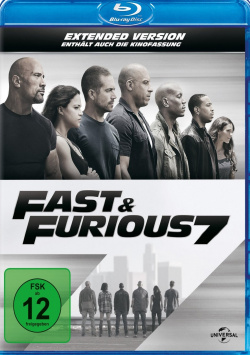 Film: One year has passed since the dramatic events that brought Dom (Vin Diesel), Brian (Paul Walker) and their crew the long-awaited impunity. Now they all try to live something like a normal life. Dom tries to approach the alienated Letty (Michelle Rodriguez), while Brian does his best to give Mia (Jordana Brewster) and their son a quiet family life. Tej (Chris "Ludacris" Bridges) and Roman (Tyrese Gibson) enjoy their freedom in a completely different way. It almost seems as if the wild times for the crew are finally over. But then their past catches up with them. Because the cold-blooded Deckard Shaw (Jason Statham) literally walks over dead bodies to take revenge on those who put his brother Owen (Luke Evans) into a coma. Agent Hobbs (Dwayne Johnson) is at the top of the list. But Dom and his friends aren't safe from Shaw's revenge either. In order to track down the killer before he finds them, the crew has to get together again to grab the prototype of a novel surveillance program for the government. If they succeed, they can use this program to find Shaw. And so it goes for Dom, Brian, Tej, Roman and the others again behind the wheel and with all the available horsepower around the world - all for the safety of their big family...

The unexpected death of lead actor Paul Walker, who was still in full swing during the shooting in a car accident died, of course hangs like a heavy cloud oppressively over "Fast & Furious 7". There probably won't be a fan of the series who gets a queasy feeling in some of the scenes of the new movie of the enormously successful series. For the makers it was a difficult undertaking to finish the movie after Walker's death in such a way that his memory is appreciated, but the fans are still offered carefree entertainment with the usual amount of action and spectacular stunts. And by the way, the last film, the most successful part of the franchise to date, was to be topped in every respect.

Only two options remained under this pressure: either "Fast & Furious 7" becomes a completely overloaded, unbalanced chaos that wants too much and that's exactly why none of it really achieves anything. Or, however, director James Wan succeeds in delivering the best part of the series so far, true to the motto "Now more than ever". Even though this may not have been a great success dramaturgically, the movie is still closer to the second option than to the first one. He clearly benefits from the wise decision of the makers not to take a step back in action and fun after Walker's death out of misunderstood respect. Rather, the actor is more than dignifiedly bid farewell by offering his fans exactly what has made him so popular with this series. That he has been replaced by his brother and computer tricks in the scenes shot after his death can only be seen on closer inspection. James Wan and his team have succeeded very well in giving Paul Walker the farewell he and his film character Brian deserve.

But "Fast & Furious 7" is actually only a big Paul Walker farewell show at the end, when he is paid tribute with excerpts from the earlier films and a moving voice-over commentary by Dom alias Vin Diesel. But until then the movie is one thing above all else: a real action grenade. Of course, logic and the laws of gravity are lost after only a few moments. When Brian has to free himself from a bus that threatens to plunge into a deep abyss or when he and Dom crash through three skyscraper towers in Dubai in an extremely rare car, it's so unrestrainedly exaggerated that there probably wouldn't be anyone who would take it seriously. And that's a good thing. Because the "Fast & Furious" films have never been about depth, closeness to reality or ambition, but only about action, fun and lots of horsepower. And in this respect, Part 7 was actually able to put another scoop on it.

This is also due to the decision to hire Jason Statham as the villain. The "Transporter"-Star is simply great as a merciless killer and especially in the fight scenes he provides some real wow moments. But also Kurt "Die Klapperschlange" Russell is allowed to step on the gas again with 64. And also Tony Jaa ("Ong-bak") enriches the series with his martial arts immensely. And as befits a real "Fast & Furious" film, there's plenty of food for the eye in addition to the action: tuned cars, flashing chrome, bulging buttocks of attractive ladies and naked upper bodies of muscle-bound men. Who needs deep dialogues there?

Although some action sequences are cut a bit too hectically and especially in the first third the whole "family is the most important" message is served a bit too much with penetrating pathos, "Fast & Furious 7" is a great action flick with tension, humor and mighty loud noise. The film offers the fans exactly what they want to see. And if you don't expect more than a material battle spiced up with a little self-irony, you simply can't avoid buying a DVD or Blu-ray. Absolutely worth seeing!

The Extended Cut: The extended film version is actually a small deceptive package. The extended version is almost 2:30 minutes longer and primarily offers minimally extended scenes, which you probably only notice when you have seen the cinema version about 20 times. There are no really significant extensions or really new scenes. Of course, longer is certainly better for fans. But the Extended Cut doesn't really convince as a purchase argument.

Picture + Sound: The slightly altered color scheme gives the film a specific look. The rich colours support the sometimes very good contrasts, which are also positively noticeable in the numerous dark sequences, such as the final chase through the night L.A.. The sharpness of the completely undisturbed image is also on a very high level, whereby the image depth is also convincing. The powerful DTS Digital Surround 5.1 Mix is a great mix of bass-heavy music and crashing sound effects. The dialogues are well coordinated and don't get lost in the action even in the especially explosive scenes. All in all, picture and sound leave a really very good impression.

Extras: The bonus offer starts with four unreleased scenes (approx. 5:59 min.) that didn't make it into the extended cut either. Two of these scenes deal with Latty's desperate attempt to find out more about her past, which she can no longer remember. Continue with "Conversation about Fast" (approx. 31:47 min.). In a kind of video commentary, the director takes a look at the emergence of some key scenes. That's not uninteresting, but a little bit too hard on cool trimmed. While "Back to the beginning" (approx. 12:11 min.) will then deal with the success of the series, the featurettes "Flying cars" (approx. 5:42 min.) will be presented.), "Schnapp`s Dir" (ca. 7:31 min.), "Turmsprünge" (ca. 6:53 min.) and the four miniature featurettes of "Der Kampf" (altogether ca. 11 min.) with the elaborate stunts of the movie. Finally there is a look at the cars in the movie (about 10:42 min.), a visit at the event "Race Wars" (about 6:34 min.), the music video for the number 1 hit "See You Again" (about 4:05 min.), as well as a look at the big "Fast & Furious" attraction in the Universal Studios (about 8:15 min.).

Fazit: "Fast & Furious 7" was able to collect more than 1.5 billion dollars at the box offices worldwide and is thus one of the most successful films of all time. The success is certainly due in part to the sad fact that this is the last part of Paul Walker's life, who died far too early. But to make that out as a reason alone wouldn't do the film justice. Despite some terrible dialogues the movie offers first class action, cool sayings and a pleasant pinch of self-irony. The film is simply fun and doesn't offer a moment of boredom. The Blu-ray is technically well to very well implemented. The bonus material is good standard and offers some interesting features, especially regarding the stunts. That's clearly what it's all about in the end: absolutely recommendable]