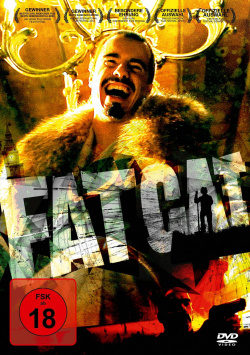 Contents: Zeus (Tommaso Arnaldi) and Burro (Lorenzo Richelmy) would like to be the big gangsters. But in reality they are only small henchmen for the unpredictable gangster boss Mosca (Alberto Onofrietti). When the two of them once again hit the strands and kill the lover of Barone (Massimiliano Sbarisi), Zeus and Burro have to fear that Mosca will wring their necks, but instead their schizophrenic boss shows himself surprisingly gentle and forgives them. That would be the end of the matter if Zeus hadn't, since he had to fear Barone's revenge, taken his potential killer around the corner as a precaution. When Barone's body is found, Mosca suspects his great rival Don Galante behind the act. For Zeus and Burro the air is getting thinner and thinner and before more blood flows they prefer to settle in London. But it's not that easy to get this story out of the world...

With "Fat Cat" Italian director Michele Fiascaris has made a wacky debut that has quickly become a festival favorite. Sometimes drawn completely exaggerated, his comedy is a loving parody of classic gangster movies, whereby Fiascaris doesn't only play amusingly with common clichés. Also his sometimes consciously trashy staging increases the entertainment value of the film. It becomes clear in some scenes that the young filmmaker still lacks some experience. This is especially noticeable when either the timing doesn't work properly or the gags overshoot the target. But on the other hand the movie is full of wonderfully absurd ideas and good jokes, that you'd be very happy to forgive him for these little weaknesses.

However, you should have a weakness for a bit more exaggerated jokes. This is not only necessary in the very hectic Zeus, but also in the ever more absurdly acting Mosca. However, if you can get involved with the very special humor and also don't expect a smooth ironed parody, you will get a really well done little indie comedy, which of course works out especially well, if you know the numerous role models that are quoted here. But even if you just want to have some weird and bloody fun for about 90 minutes, you will get your money's worth here.

That the film was not dubbed for the German release and is only available in the Italian OV with German subtitles, really only reduces the pleasure for those viewers who generally have a problem with having to read subtitles during a film. Otherwise, there is a clear one for the amusing overall package: Recommendable!

image + sound: The image of the DVD often has a slightly distorted, but very atmospheric color scheme. The overall sharpness is on a very good level and in many scenes even smaller details come into their own. The sound is only available in the Italian original with German subtitles. The stereo mix is very powerful, but also a little unspectacular in terms of surround effects. Altogether this is enough for an absolutely satisfied one: Good!

Extras: As a bonus there is an entertaining Making of (approx. 18 min.) and two edited scenes (approx. 3:17 min.). Not much, but worth seeing!

Fazit: "Fat Cat" is a wonderfully crazy gangster comedy, which presents numerous genre clichés completely exaggerated and the whole thing garnished with a good portion of black humor. That is here and there perhaps a little bit too over-twisted, but it's a lot of fun overall. The DVD presents the award-winning comedy in good picture and sound quality, the bonus offer is clear, but worth seeing! For lovers of bizarre gangster movies who don't necessarily need a German dubbing, this DVD is also absolutely recommendable: