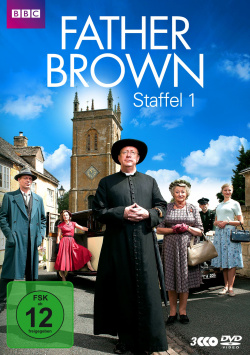 Content: Whether as a book, TV series or feature film - the adventures of the sympathetic hobby investigator "Father Brown" have inspired generations of thriller fans for over 100 years. While in Germany the "Pater Brown" films with Heinz Rühmann and the contemporary "Pfarrer Braun" adaptation with Ottfried Fischer are particularly well known, in Great Britain Alec Guiness from the 1954 film "Die seltsamen Wege des Pater Brown" (The Strange Paths of Father Brown), along with Kenneth More from a 13-part TV series from 1974, has so far been regarded as the best embodiment of the novel character created by G.K. Chesterton. Mark Williams, known from the "Harry Potter" films, now wants to dispute this rank with him in a new BBC series.

This latest "Father Brown" adaptation takes place in England in the 1950s. In the small town of Kembleford in the Costwolds region, the Catholic priest Father Brown (Williams) is always there for his congregation - and not just during church services or confessions. Because Father Brown, who seems inconspicuous, has acquired a very special talent for combination through his preference for crossword puzzles and crime novels, which is extremely helpful to him in his actual hobby: solving crimes. And there are unusually many of them in his church. Whether a slain playboy, a murdered wife, the alleged suicide of a writer or the mayor killed by an electric shock - Father Brown always manages in his very special way to give the local Inspector Valentine (Hugo Speer) the decisive help in solving the cases - which brings the Inspector to the brink of despair despite all admiration for Father Brown. The fact that also the resolute parish secretary Mrs. McCarthy (Sorcha Cusack) and the housemaid Susie Jasinski (Kasia Koleczek) regularly take part in the investigations does not make the matter more bearable for Valentine. But at the end of the day it can't be denied that Kembleford can sleep peacefully thanks to Father Brown - until the next murder...

The 2013 adaptation of "Father Brown" certainly can't convince with originality. From the first scene on, the whole thing feels very familiar and the unagitated staging strictly follows all the rules of classic crime food. What should be a clear weak point, actually proves to be the real strength of the series. Because the old-fashioned charm that "Father Brown" radiates lies like a warm blanket over the audience and makes sure that you can relax in nostalgic security. Sure, it's not really that exciting. In times in which dark Scandinavian thrillers dominate the crime world, a cautious investigator like the clergyman from the fictitious Kembleford with his rather conventionally constructed cases seems a bit well-behaved - even though there are some rather bizarre deaths here.

However, it is precisely this cautiousness that makes this new edition of the popular "Father Brown" series so successful. The audience is well entertained, gets wonderfully dry humor served by charming actors and despite murder and manslaughter gets a real good mood guarantee. If you like British crime series in the style of "Inspector Barnaby" and love old-fashioned TV food in the best sense of the word, you should definitely take this opportunity. Absolutely worth seeing!

Picture + sound: The wonderful nostalgic feeling that the series radiates is also shown to advantage in the DVD by the very warm colouring. The image sharpness is also convincing in most moments, there are no significant weaknesses such as image noise or dirt. The sound is as unagitated as the series itself, and in addition to the powerfully mixed dialogues, it provides a little movement in the surround range, especially with subtle ambient noises and the atmospheric music. Good!

Extras: Unfortunately the box does not have any bonus material.

Conclusion: Although "Father Brown" moves consistently on familiar terrain and doesn't really set its own impulses, this old-fashioned crime series in the best sense of the word is a lot of fun. Dry humour, charming actors, idyllic locations and exciting stories make this latest adaptation of the popular novels by G.K. Chesterton a particularly likeable TV entertainment. For the DVD box of the first season there is therefore - although no bonus material is available - a clear: Absolutely recommendable!