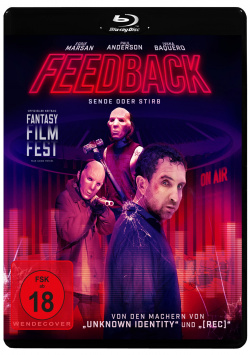 Film: The controversial radio talker Jarvis Dolan (Eddie Marsan) is used to people hating him for his often drastic words. He's even been kidnapped recently. Yet he does not allow himself to be forbidden from speaking. Jarvis again gives his politically incorrect opinion of himself this evening, without worrying whether he will offend anyone with it. But then something happens that actually silences Jarvis: two masked men storm the station and threaten to kill Jarvis' employees if he doesn't stay on the air. But the talker has no idea what is actually behind the robbery…

"Feedback", the directorial debut of the Spaniard Pedro C. Alonso, is a nasty little chamber play that skillfully lures the audience onto the wrong track and blurs the boundaries between good and evil, right and wrong. If the roles seem to be relatively clearly distributed at the beginning, it looks quite different in the end. Admittedly, the motives of the masked intruders in no way justify their actions. But their revelation clearly shifts the viewer's point of view to Jarvis, whereby the events in the last act are also perceived quite differently than they were at the beginning.

>You are virtually pushed into a moral dilemma here, which raises some interesting questions. The fact that all this takes place in a very cramped space intensifies the effect enormously. Admittedly, just in the middle of the movie there are some smaller lengths. But these tough moments are fortunately very rare. Over long stretches of the running time Alonso succeeds very well in maintaining the tension before he lets the whole thing end in a bitterly evil-cynical finale.

Who likes nasty little thrillers and doesn't mind a very reduced production can really be recommended to "feedback". Especially since Eddie Marsan delivers a really strong performance, whose genius actually only becomes apparent at the very end. But there is, with small deductions in the B note, a more than deserved "worth seeing"!

Picture + Sound: The events usually take place in the darkened radio studio. Nevertheless, even smaller details are easily recognizable. The colouring of the absolutely clean picture is also convincing. The DTS-HD Master Audio 5.1 Mix is primarily determined by the dialogues, but also has a few pleasantly powerful moments to offer, in which the surround speakers of the home cinema system are used. Good!

Extras: The Blu-ray has as bonus four mini featurettes about the movie (about 1:09 min.), the set (about 1:37 min.), the characters (about 1:57 min.) and the make-up and special effects (about 1:44 min.). Due to the extreme brevity, these insights into production cannot, of course, go into depth. The parts about the set and the effects are still worth seeing. A trailer show completes the small bonus package.

Fazit: "Feedback" is an exciting, sometimes quite bloody chamber play that skilfully blurs the boundaries between good and evil and comes up with some surprising twists. That's not completely free of clichés and smaller lengths, but the oppressive mood and the intense playing of the actors can tear out a lot. The Blu-ray presents the film in good picture and sound quality, the bonus material on the other hand is rather lean. All in all however for friends of nasty little thriller absolutely recommendable!