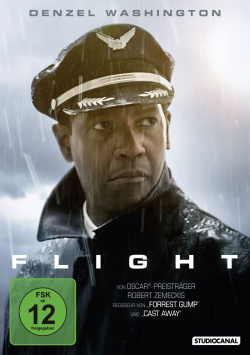 Film: It is now more than twelve years since director Robert Zemeckis delivered his last real film with "Cast Away". For a long time it looked like Zemeckis would only shoot 3D movies in motion capture after the successes of "Der Polarexpress", "Die Legende von Beowulf" and "Eine Weihnachtsgeschichte". But luckily he thought it over again. Because with "Flight" he finally proves once again what a good storyteller he can be if he doesn't have to concentrate primarily on technical gimmicks.

At the centre of the drama is the experienced pilot Captain Whip Whitaker (Denzel Washington), who, after years of experience, can fly his passengers safely through the USA in his sleep. So he has no problem with getting into the cockpit after a night full of sex, drugs and alcohol. But what was to become a routine flight soon threatens to end in disaster when the aircraft gets into severe turbulence and a series of technical problems pushes the aircraft into a nosedive that Whitaker and his young co-pilot seemingly can't stop anymore. Only with a spectacular manoeuvre can the Captain achieve the miracle: he brings the plane to the ground and loses only six of the 96 people on board. He is quickly celebrated by the media as a hero. After all, everyone knows that nobody but Whitaker could have landed the plane. But the routine examinations shed new light on the situation and especially on the hero of the hour. And while cunning lawyer Hugh Lang (Don Cheadle) struggles to keep Whitaker's reputation and escape jail time, Whip is forced to deal with his own demons. And the pilot doesn't like this at all...

The first half hour of "Flight" is really great. This is not only due to the really spectacularly staged plane crash, but also to Denzel Washington's outstanding performance, which can fully unfold here due to the extremely strong script. And when John Goodman has his really divine first short appearance, there is no doubt that Zemeckis hasn't forgotten his craft in the real film. The whole thing is moving, amusing and exciting. The problem is that "Flight" can only seldom swing up to such heights after this strong beginning. There are some great moments that are especially owed to the very good actors. Apart from that, the drama about guilt and atonement splashes rather leisurely towards its unfortunately badly exaggerated finale. No question about it, the movie is still good in its weaker moments and the story is very engaging. Especially the relationship between Whip and the unstable Nicole (Kelly Reilly) offers the viewer some very strong scenes. Unfortunately, John Gatis's script relies too often on predictable clichés, which takes a lot of the tension out of it, especially in the second half. Had Zemeckis had the guts to go the darker way at the end instead of relying on the good humanity of his characters, the drama wouldn't only have surprised, but could have had a lasting effect as well. But after a first-class beginning the whole thing falls into a too deliberate ordinariness to leave a real impression.

In the hands of a less talented director and carried by a weaker main actor "Flight" might even have become completely meaningless. At least that's how it turned out to be, at least at times, a very entertaining, visually great drama with some great moments, that could have taken more of the at times pleasantly biting humor and less of the kitsch that was too thick at the end. Despite the obvious weaknesses, the bottom line is that there is still more than deserved: worth seeing!!

image + sound: Technically, the DVD leaves a good to very good impression. The picture is very clean and shines with a high image sharpness, a powerful coloring and harmonious contrasts. The sound is presented in a powerful Dolby Digital 5.1 mix, which transports the dialogues and the music out of the speakers well coordinated in the quieter moments, especially during the plane crash, but can also offer some rich surround effects. Good!

Extras: Besides the main movie the DVD also has some nice extras to offer. In addition to a commercial making of (about 11 minutes) and another short documentary about the creation of "Flight" (about 10 minutes), there is also a question and answer session with actors and makers of the film (about 14 minutes), in which Denzel Washington could not participate. In addition a further featurette offers an insight into the origin of the airplane crash (approx. 7 min.). The trailer of the film and further program tips of the provider round off the additional offer.

Fazit: "Flight" marks the long overdue return of Robert Zemeckis to the real film. Even though the drama can't keep up the high level of its first third until the end, at the end a very positive overall impression prevails, which is reinforced in the DVD by the good technical realization and the decent additional material. But despite dramaturgical weaknesses there is a clear one: recommendable!