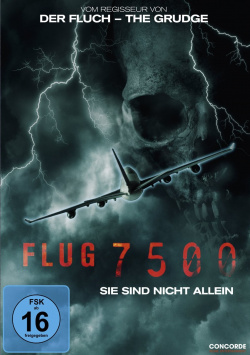 Film: Above the clouds the horror must be boundless...

Actually it should be a relaxed holiday among friends, but for Brad (Ryan Kwanten) and his wife Pia (Amy Smart) the whole thing threatens to become an absolute torture. Because the two have already separated some time ago and now, in order not to spoil the holiday for their friends, they have to play the happy couple. Rick (Jerry Ferrara) and Liz (Nicky Whelan) are still at the very beginning of their marriage and are just coming back from their honeymoon. But Rick isn't really happy because of the very dominant behaviour of his wife. Luck is also not the specialty of flight attendant Laura (Leslie Bibb), who has an affair with the pilot and so far waits in vain for him to leave his wife for her. She and many others of the passengers on the flight to Tokyo carry around their personal fears and worries. But when one of the passengers has a seizure and dies after a violent turbulence, this is the beginning of a real horror, next to which all other problems look like insignificant children's stuff. Because from now on it's all about bare survival for everyone aboard Flight 7500...

"Flight 7500 - You're not alone" is the latest work by Takashi Shimizu, who could inspire an international horror audience with his "The Grudge" movies (and their "Ju-on" originals). For his latest English-language production, Shimizu made lively use of the Thai horror film "Dark Flight - Ghosts on a Plane" and the series "Twilight Zone" and spiced the whole thing up with creepy effects strongly reminiscent of "The Grudge". The result is an atmospheric Mystery-Grusler with some successful moments of tension. However, at the beginning the story takes too much time to build up the very clichéd characters and their personal conflicts. This is neither very well played nor really excitingly written.

When the action picks up speed after about 25 minutes and a little creepy tension is allowed to spread, the clichés don't diminish, but they don't stand out so negatively anymore. Because Shimizu manages very well to build up an oppressive and eerie atmosphere, which can easily override the superficial character drawing. The story also takes an interesting turn here, from which quite a lot can still be extracted. But before it's over, the movie is already over. The ending, which was supposed to be a big shock for the audience, fizzles out a bit.

This may all sound very negative now. But despite its weaknesses "Flight 7500 - you are not alone" offers not only spectators with fear of flying a real thrill. Those who simply want to experience cultivated horror and like series like "Outer Limits" and "Twilight Zone" will also be entertained here. Not a masterpiece, but especially worth seeing in the second half of the film!

Picture + sound: The picture on the DVD brings out the dark, hypothermic atmosphere that prevails on board the plane. The overall sharpness is on a good level and only shows some small weaknesses in the dark scenes. The colour scheme is very atmospheric and the contrasts are also convincing in many scenes. The sound is primarily determined by the dialogues, but also has many small and large sound effects to offer, which always provide a pleasant goose bump feeling and bring a little movement in the surround area. Good!

Extras: As a bonus the disc only has the trailer to offer.

Fazit: "Flug 7500 - Sie sind nicht allein" has some very good moments of excitement to offer, but is unfortunately already over before the story can unfold properly. With the quite short running time Shimizu takes too much time to build up the all too clichéd and actually unnecessary conflicts of the individual characters. So in the first 25 minutes there is almost no tension. Only little by little the whole thing captures the audience and creates a pleasant tension. But Shimizu can't even begin to exploit the potential that the cramped space far above the clouds would have offered for such a horror film. The DVD presents the film in good picture and sound quality, but you won't find any bonus material. No horror high-altitude flight, but also no total crash landing and therefore absolutely recommendable!