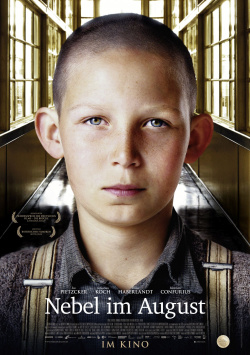 Southern Germany, early 1940s: Since his single father, a travelling trader, has no permanent residence, and he is classified as "not educable" by the children's homes in which he has been so far, 13-year-old Ernst Lossa (Ivo Pietzcker) is sent to a mental hospital. Actually, he should only stay here until his father has found a steady job and an apartment. But then the boy notices that sick and handicapped inmates are killed on the orders of clinic director Dr. Veithausen (Sebastian Koch). He knows that it can happen not only to his new friends, but also to himself at any time. And so for him there is only one way out: escape!

With "Nebel im August" director Kai Wessel deals with an extremely gloomy chapter of the Nazi regime: the so-called euthanasia program, which claimed more than 200,000 lives in German mental hospitals between 1939 and 1944. Based on the true fate of 13-year-old Ernst Lossa, the cruel incidents are thematized in a gripping drama. It's hard stuff that's not always easy to endure. Nevertheless, Wessel succeeded in stirring up the audience without completely overwhelming them with the gravity of the story.

One could accuse the film of this being achieved by the fact that the story is told more conventionally and isn't completely free of clichés, although some characters in particular have a somewhat too one-dimensional drawing. But even if this point of criticism may be true, it does little to change the enormous power of this drama. Kai Wessel has staged an important movie that makes you angry, that can make you cry, but that also takes time for some easier moments, in which something like a glimmer of hope can show up.

Not to be left unmentioned here are the actors, especially Ivo Pietzcker ("Jack"), who was only 12 years old during the shooting. He embodies the different facets of Ernst Lossa in an absolutely believable way and reveals an enormous talent especially in very difficult scenes. But also Fritzi Haberlandt as good soul of the institution and Henriette Confurius in the ungrateful role of the ice-cold angel of death leave a lasting impression. The entire ensemble, also supported by equipment, camera or music, ensures that "Nebel im August" has become an extremely intense work.

It is difficult to recommend such a movie as worth seeing. No question about it, it is a great, very good and important work - but also a very, very difficult one. You have to be prepared to deal with this cruel topic, because what you have seen is really hard to shake off again. However, this also shows exactly what power this movie has. And therefore there is a very clear one: Absolutely worth seeing!