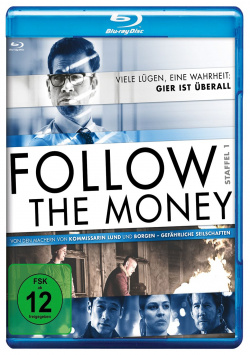 Film: It all starts with the discovery of a body near a wind farm. For Mads Justesen (Thomas Bo Larsen) it is quickly clear: This was no accident. There is growing evidence that the rapidly expanding energy company Energreen is involved in the death of the man. The perfect facade of the group, represented by the charismatic Alexander Sødergren (Nikolaj Lie Kaas) quickly cracks as Mads and his new colleagues from the Department of Financial Crime deal with the case. With the help of the cunning Claudia Moreno (Natalie Madueño), Sødergren and the other backers try to avert the damage of Energreen. Then, however, the events unintentionally involve Nicky (Esben Smed Jensen) and Bimse (Lucas Hansen) as well…

"Follow the Money" begins like a classic crime thriller, but then quickly turns into an excellent economic thriller that works so well because it traces the events from different perspectives. On the one hand, there are the investigators around Mads Justesen, who not only gets off on his investigation methods from time to time, but also has to struggle with private problems in the course of the story, which could throw him completely off track. Then there is the management of Energreen, which has a lot of dirt on its hands, which the legal expert Claudia Moreno is supposed to cover up. She is one of the most interesting characters, because on the one hand she is dead for her career, on the other hand she is plagued by her conscience.

And then there are the friends Nicky and Bimse. Nicky only wants the best for his girlfriend and their child that always gets him on the wrong track. By chance the two are drawn into the machinations of Energreen. And whatever Nicky as the sensible one of the two tries to get them out of there, she only pulls them deeper into the swamp.

The very multi-layered and interesting characters, the cleverly interwoven storylines and the tension screw, which becomes more and more tightened, make this Danish series an extremely thrilling TV entertainment. There may be some smaller lengths here and there, but all in all "Follow the Money" manages to captivate for about ten hours and to be feverish. The story will come to a clear end, but nevertheless we can look forward to a second season, which has already been run in Denmark (season 3 is also planned). If you like series like "Bad Banks", you can also access them here with confidence. Absolutely worth seeing!

Picture + sound: The audiovisual implementation is absolutely convincing for a TV series. The colouring is extremely atmospheric, whereby the somewhat undercooled tones capture the different moods of the individual storylines very well. The picture sharpness is on a good to very high level for a current TV series. Even in gloomy scenes smaller details come into their own. The 5.1 DTS-HD MA Mix is also pleasantly atmospheric, with the voices sounding very directionally mixed. Ambient noises such as wind and sea noise, as well as smaller sound effects, ensure that the surround channels also get something to do. Good.

Extras: Bonus material does not have the Blu-ray unfortunately to offer.

Fazit: "Follow the Money" is an exciting whodunit, gripping drama and thriller all in one. The individual storylines, which are built up in the course of this first season, condense more and more into an exciting network of conspiracies, greed and murder. Despite some small lengths a really great first season, which is presented on the Blu-ray in good picture and sound quality. The only drawback is that there is no bonus material. Nevertheless, for this first relay box the following applies: Absolutely recommendable!