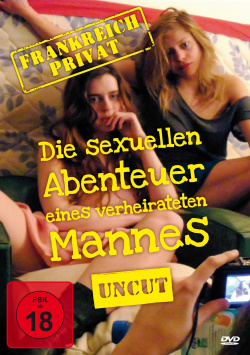 France Private - The Sexual Adventures of a Married Man - DVD

Contents: The times when Etienne (Patrick Zocco) felt sexually attracted to his wife Christine (Valérie Maes) are long gone. He lives in a frustrating daily grind from which he absolutely wants to escape. When he meets the young Juliette (Lizzie Brocheré) in a cemetery, he quickly feels attracted to the attractive student. They begin a passionate affair that is supposed to give him exactly what his married life can no longer offer him: Joy, joy and joy again! While his wife gets more and more lonely, Etienne always gets his satisfaction from his young lovers Juliette and Juliette (Christine Armanger). But as he becomes more and more possessive towards the two girls, his newly found happiness seems to be heading towards a tragic end...

"The sexual adventures of a married man" is the second film published in the series "France Private". While "The Sexual Secrets of a Family", apart from some very clear sex scenes, offered a rather straightforward staging, the film by Lou Viger and Jacky Katu seems more like an experimental art project, a mainly improvised, very bulky look at the search of young women for their place in life and the escape of an older man from his everyday marriage life. With a very restless camera work, statements spoken directly into the camera and long scenes in which the Juliettes can be seen riding their bicycles through the city, the drama quickly proves to be very exhausting and only slightly enthralling.

"The sexual secrets of a family" had a certain closeness to life. Surely the question arose here and there whether the portrayal of sex really should have been so explicit. Nevertheless, the film somehow seemed authentic and engaging. That is unfortunately not the case with "The Sexual Adventures of a Married Man". The "artistic" camera work, for example, which is very close to the faces of the protagonists, shows only parts of them or shows them from above, builds up a distance to the viewer just like the not always comprehensible re-cuts of moments that do not belong to the scene. The play of the actors, which is more reminiscent of theatre plays, underlines this artificial character of the staging even more.

In addition, the development of the characters is difficult to comprehend. The only character you can identify with as a viewer is the cheated Christine. But all in all the characters and the whole story lack the accessibility that would be necessary to integrate the viewer into the events. Thus, "The sexual adventures of a married man" seems like an experimental film, that wants to be too high an art to be able to offer the audience something like simple entertainment. As an art film, the whole thing certainly has a certain appeal for those interested. As a simple entertainment drama with an erotic touch, however, the work unfortunately doesn't work. But there is only one: very conditionally worth seeing!

image + sound: The amateur film look of the drama is also reflected in the audiovisual implementation. In many moments the picture appears restless, blurred or blurred, although in most moments it is a matter of deliberately used stylistic devices. Nevertheless, it's rather difficult to become friends with it as a viewer. The sound, which is available in the German language version in Dolby Digital 5.1, makes the dialogues sound very powerful, but otherwise has hardly any effects to offer that would breathe a little life into the surround channels. But for a low-budget arthouse film, that's perfectly all right. Good!

Extras: As a bonus, the disc only contains the trailer and further program tips from the provider.

Fazit: "The Sexual Adventures of a Married Man" is dedicated to some very interesting topics, which Lou Viger and Jacky Katu, however, are trying too hard to realize in an artistic way. The result is a stylistically exhausting, dramaturgically immature and emotionally astonishingly cool drama, which unfortunately can't really live up to its expectations. As an experimental work, the whole has a certain charm. But especially in comparison to the "The sexual secrets of a family", also published in the series "France privat", this film simply lacks entertainment value and a dramaturgy that can be felt. And that makes "The sexual adventures of a married man" unfortunately only very conditionally worth seeing!