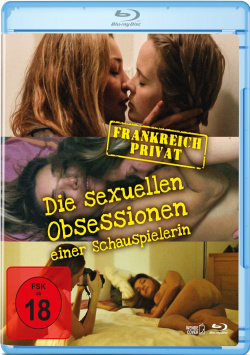 France Private - The sexual obsessions of an actress - Blu-ray

Contents: The young actress Anaïs (Aurélie Houguenade) is eaten up by self-doubt. She absolutely wants to get the lead role in the play "Psychosis 4.48" by British playwright Sarah Kane, but doubts that she is good enough for it. Encouraged by the support of her friend Pierre (Manuel Lambinet), she harasses the director (Jean-Marie Galey) until he gives her the leading role, even though she had already been promised another one. Anaïs now wants to give in to this new challenge. She wants to merge with her role, which causes her to fall deeper and deeper into a self-destructive intoxication that breaks her relationship with Pierre. But the young actress is only too willing to pay this price, as the work on the play opens up completely new perspectives for her own life - whether they are good for her does not matter...

"The Sexual Obsessions of an Actress" is the fourth film published in the series "France Private". As already with "The sexual adventures of a married man" Jacky Katu directed again. His improvised narrative style and his quite permissive approach to sexuality also come to bear here. What makes this drama more interesting, however, is its direct reference to the life and work of the controversial playwright Sarah Kane, who took her own life in London in 1999. The fact that her life, dominated by depression and artistic expression, is also reflected in the obsession of the young French actress should make the film quite exciting, especially for those viewers who are familiar with Kane's work, but especially with "Psychosis 4.48".

Otherwise, however, it also applies to "The Sexual Obsessions of an Actress" that the improvised style of acting and staging sometimes seems somewhat unwieldy. In addition, the main character, who acts very hysterically from the beginning, is extremely exhausting in the long run and not exactly a real popular figure. This is only true for her friend Pierre, who says goodbye to the story after the first act. Moreover, in its effort to be close to reality, the movie seems to be a bit too hard to convince. This applies to the dramaturgical aspects as well as to the numerous sex scenes. These are pleasantly staged in a relaxed manner and are therefore a pleasant contrast to the usual sterile high-gloss eroticism. Nevertheless, the whole production seems too theatrical, too exaggerated to be able to convey its interesting theme in a truly stirring way. Therefore: Only for viewers who can get involved with the idiosyncratic staging and the complicated main character or for everyone who liked "The sexual adventures of a married man", worth seeing!

Picture + sound: The fact that the drama is a very small and inexpensive production is also reflected in the audiovisual implementation. In many moments the picture appears restless, slightly blurred or somewhat blurred, although in most moments it is a matter of deliberately used stylistic devices. Nevertheless, it's rather difficult to become friends with it as a viewer. The sound, which is present in a rather unspectacular DTS-HD MA mix, makes the dialogues sound very powerful, but otherwise has hardly any effects to offer that would bring a little movement into the surround channels. But for a low-budget arthouse film, that's perfectly all right. Good!

Extras: As a bonus, the disc only contains the trailer and further program tips from the provider.

Conclusion: "The sexual obsessions of an actress" is essentially a good and interesting study of what happens when the boundaries between a role and one's own personality become increasingly blurred. But the very improvised game and the unpleasantly hysterical main character from the beginning make this drama a rather exhausting affair. But if you like Jacky Katu's idiosyncratic style or his previous film "The sexual adventures of a married man", you can take a look here too.