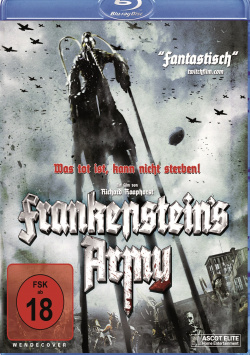 Film: In 1944, a unit of the Russian army received an emergency call on the eastern front from several chamberades asking for support in the fight against the enemy. To show comrade Stalin how great his army is, the rescue operation is filmed with the help of state-of-the-art camera technology. But when the troops arrive at the place where their chambers are supposed to be, they find instead only a seemingly abandoned building, in whose extensive cellar vault pure horror lives. And while the unit is gradually decimated in an extremely bloody way, the survivors uncover a gruesome secret - a secret that the camera captures in all its horror...

"Frankenstein's Army" offers the horror fan a hearty battle record that celebrates its trashy story with some wonderfully absurd ideas in an extremely entertaining way. In order to be able to present the history settled at the end of the Second World War in the currently so popular found footage style, the makers have of course come up with a suitable explanation. The soldiers simply had at their disposal a highly modern camera specially developed for the military with which they could record not only pictures but also sound in surprisingly good quality.

The beginning of the film is, as with many other found footage films, relatively unspectacular. Here the story takes its time to introduce the characters - from whom you soon have to say goodbye again - and to abduct the viewer to the cold eastern front. The makers manage to do that quite well, whereas the camera work fortunately does without too blurred pictures.

That changes, of course, as soon as the soldiers meet Dr. Frankenstein's Super Warrior in the basement vault. The picture stays calm enough during the important moments, so that you can enjoy the crazy creations that director and creature designer Richard Raaphorst has come up with. There are beings who have a propeller instead of a head, who have crab-like scissors instead of hands, or who run around with chainsaws attached to their arms. In the lab of the mad doctor there are similar bizarre things to see, such as a teddy bear with a woman's head. As usual as the staging may be in many moments, "Frankenstein`s Army" clearly stands out from the crowd when it comes to design.

That's not only bizarre and extremely grotesque, but also extremely bloody in many scenes. Of course, Raaphorst has staged a very special movie, which will only meet with limited approval from viewers who appreciate rather straight mainstream horror. But if you like it evil, bizarre and weird, you can easily overlook some dramaturgical pendants and have a lot of fun during this visit to the monster hell. And for such horror fans the following also applies: Absolutely worth seeing!

Picture + sound: The film uses the means of found footage horror. Since the events in the 40s were supposed to have been recorded with a super camera, small soiling, overexposure and similar visual effects were deliberately used. Since they belong to the style of the movie, they also aren't rated negatively. Otherwise, the image of the Blu-Ray has a high image sharpness and a very atmospheric coloring. Also in the numerous dark scenes there are only few qualitative losses, which is why the overall impression is also very positive. The sound that is present in a DTS-HD 5.1 Master Audio Mix has some strong surround moments to offer, especially in the second half of the film for an effective sound carpet. Good!

Extras: As a bonus there is a worth seeing Making of (approx. 30 min.), as well as the trailer and further program tips of the provider. A clear, but good additional offer!

Fazit: "Frankenstein's Army" is an amusing variant of the actually overused Found-Footage genre. Hearty gore effects, wonderfully grotesque ideas and a good portion of black humor make this horror hit, despite a high trash factor, a celebration for all those fans of the genre for whom it can be a bit weirder and more bloody. The Blu-Ray of the movie is also technically convincing, the bonus material is a bit meager, but very worth seeing. That's enough for a more than earned one: Recommendable!