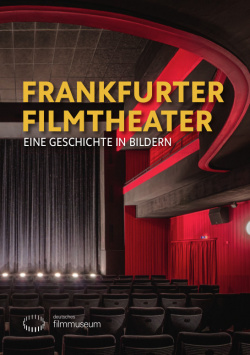 Did you know that where the Hugendubel sells his books today, one of Frankfurt's most magnificent cinemas once stood? That there, where the Gibson Club is now located, films were shown for many years? That next to Karstadt in Schäfergasse, where today sportswear is sold, the Royal was home to a film theatre that won the Oscar for technology? Or that at Willy-Brandt-Platz, where today "the cow laughs" and Turkish specialities can be enjoyed, until a few years ago the latest cinema films were still inviting people to escape from reality? Or that Kaiserstrasse was the birthplace of Frankfurt's cinema culture? But not only in the past 15 years has the Frankfurt cinema landscape changed drastically. Since its beginnings, it has repeatedly been exposed to constant change.

The "Frankfurter Filmtheater", a "story in pictures", traces this in a very worthwhile way in just under 23 minutes. Most of the pictures could already be seen in the excellent catalogue for the 1995 exhibition "Living Pictures of a City", which deals with this topic in much more detail (the book is a must for all Frankfurt cinema lovers!). Nevertheless, this short documentary with its compressed information content and numerous photos is a highly informative and worth seeing excursion through the cinema history of Frankfurt. Like the exhibition "Filmtheater", in the course of which this DVD will be published, this film contribution is not meant to be permeated by nostalgic melancholy, but simply to trace the state of constant change to which the cinema landscape in general is subjected.

Sicherlich, with some viewers who can still remember some of the old cinemas, it is hardly possible to prevent some melancholy from arising when looking at the pictures. But first and foremost, "Frankfurter Filmtheater" is a piece of Frankfurt's cultural history worth seeing, a perfect complement to a visit to the exhibition at the Filmmuseum and a must for everyone who is interested in the history of film theatres in general. The DVD is available in the museum shop or online: Http://www.shop-filmmuseum.de/