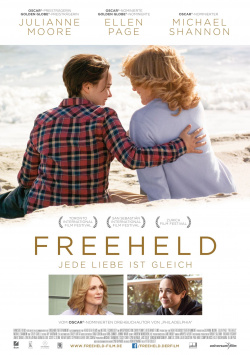 Freeheld - Every love is equal

Laurel Hester (Julianne Moore) is a policewoman with body and soul. In her New Jersey office, she is a highly respected colleague who has cracked many a difficult case with her partner Dane Wells (Michael Shannon). But about her private life she leaves Dane in the dark herself. And for good reason, because Laurel's a lesbian. If this were to become known, many of her very conservative colleagues would certainly no longer be particularly good at speaking to her. Even when she finds the love of her life in the young mechanic Stacie (Ellen Page), she keeps the relationship secret. But then fate strikes mercilessly: Laurel is diagnosed with terminal lung cancer. She will die and Stacie will not only lose her, but also the little home they have built together. Only if Laurel's pension rights were transferred to Stacie could she keep the house she shared. But for this she must make her love public and go into a heavy fight against the narrow-minded authorities. And whether she has the strength and the time for it is questionable…

In "Freeheld" director Peter Sollett ("Nick & Norah - Soundtrack einer Nacht") tells the true story of Laurel Hester, which was already the subject of an Oscar-winning short documentary in 2007. Although Sollett has adopted the content and title of Cynthia Wade's award-winning documentary, he tries to give his interpretation a more universal character. The struggle of a couple for justice is the main focus. At the same time, however, the film should generally be a plea for equal rights, tolerance and the recognition of same-sex marriage. It is an important and quite moving story, which is carried by a convincing Julianne Moore.

The problem with the film is that it is simply too thick in places. Some moments seem to be just staged to be used as a clip for various award ceremonies. In the movie, however, these scenes just seem too artificial, too much interspersed with clichéd pathos to really work. The very big emotional effect, which is supposed to be achieved here, only wants to be achieved to a limited extent. Moreover, Steve Carell's good, but a bit over-twisted game almost feels like a humorous foreign body in a drama otherwise dominated by dramaturgical heaviness. The little teases between the shrill Steve and the very buttoned Dane are amusing, no question. But to the predominant tone of the production, these little moments of cheering up simply don't want to work.

It's a pity that this very strong story has been so conventionally told. After all, the message of history can defy the weaknesses of implementation and the significance of what Laurel Hester and Stacie Andree achieved so shortly before Hester's death becomes very clear. At the end, the movie provides enough material for thinking and discussing and at least can move on this level. But at the end there is still a good one: Worth seeing!