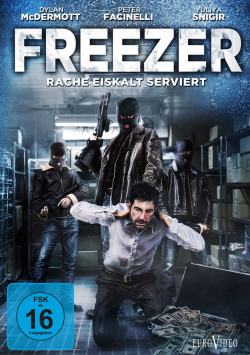 Content: Actually the engineer Robert Saunders (Dylan McDermott) just wanted to drink a toast to his birthday with his girlfriend in a bar. But after he was knocked down in the men's room, he now wakes up on hands and legs tied up in a refrigerator. With difficulty he manages to free himself from his shackles, but then two thugs of the Russian mafia stand in front of him and demand some money, which Robert allegedly stole. There seems to be a terrible confusion, which the confused Robert can't clear up either, when the beautiful and hypothermic Alisa (Yuliya Singir) appears, who at least understands his language. She makes it clear to him that he has little time to give them back the money, otherwise the cold store would become his icy grave. When Robert also finds a seriously injured policeman (Peter Facinelli) in the room, who has investigated undercover against the Mafia, he realizes that his life is really hanging by a thread and that he has to come up with something to avoid the certain death from frostbite...

It is always difficult to tell a story that only takes place in a very limited place. This can work very well, as the Ryan Reynolds thriller "Buried" proved. But there are also several examples in which the chamber play-like character was more responsible for boredom or a story that seemed too constructed. "Freezer" is somewhere in between. Director Mikael Salomon ("Band of Brothers") manages very well at the beginning to build up a high degree of tension. The initial idea reminds us of the intensive opening sequence of the first "SAW" film. The cold store in which Robert is trapped has a very claustrophobic effect, not only because of its spatial confinement. Also, the cold, which makes the prisoner more and more tired, is really noticeable for the viewer in some moments.

In such scenes "Freezer" is a very intense and well done thriller. Dylan McDermott proves to be - forgive the pun - an extremely cool leading actor perfectly cast. In view of the unusual and dangerous situation in which he finds himself, Robert seems a little too calm and too sovereign to appear 100% credible. But McDermott can easily compensate for this weakness with his engaging game. More serious, however, is the fact that the story loses itself more and more in abstruse twists and turns and thus not only loses credibility but also tension. Without giving too much away, it can be said that after a very successful 45 minutes, a much weaker second half follows, which is always somewhat dragging and has only a few highlights to offer. Finally, the finale doesn't really come as a surprise, but somehow is a lot of fun again, which is why the overall impression at the end is quite positive.

"Freezer" really isn't a masterfully constructed thriller. There are too many illogical moments and too many lengths for a spectator to gnaw his fingernails off for all the tension. But the positive aspects are perfectly sufficient to provide solid entertainment with some very intense highlights. If you don't expect more, you will get your money's worth. Worth seeing!

Picture + sound: The clean picture of the DVD pleases with an undercooled color scheme and a good overall sharpness, which could have turned out a little better only with the representation of smaller details. The Dolby Digital 5.1 Mix creates a harmonious atmosphere, with smaller sound effects breathing life into the surround channels. Good!

Extras: As a bonus the DVD has a short look behind the scenes (about 3:26 in.), as well as interview featurettes with Dylan McDermott (about 2:08 min.), Peter Facinelli (about 1:41 min.) and director Mikael Salomon (about 2:24 min.). The extras are available in original English without subtitle options.

Conclusion: "Freezer - revenge served ice-cold" is an exciting cat-and-mouse game, which, however, cannot fully exploit its potential especially in the last act. Director Mikael Salomon tries to get the best out of his claustrophobic chamber play, but at the end loses himself in very stressful plot turns, in order to really keep the tension going until the end. Still: Dylan McDermott's convincing game and some very intense moments make up for some of the weaknesses and make "Freezer" a thriller worth watching. Recommended!