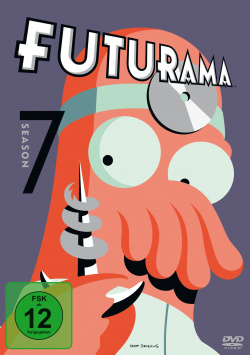 Film: With "The Simpsons" Matt Groening has undoubtedly created one of the most successful and long-lived TV series of all time and a true cultural phenomenon. But he could not really repeat a similar success with "Futurama". Although this series had a loyal fan base right from the start, it followed the adventures of delivery boy Fry, who by an unfortunate coincidence lands in the future, the robot Bender, Professor Farnsworth, Leela and Co. not in sufficient numbers to keep the series alive for a long time. After four seasons it was over, the channel Fox switched off the lights for the employees of Planet Express in 2003.

After the DVD boxes of the series had sold extremely well and the animated series "Family Guy", which was also broadcast by Fox, was successfully resurrected on TV after such a DVD boom, nothing stood in the way of a resuscitation of "Futurama". Initially, four DVD films were planned, which preceded a later TV restart. And after these four movies had sold really well, "Futurama" was revived for three more seasons on Comedy Central. In autumn 2013 Fry, Leela and Bender had their final adventure.

In the home cinema "Futurama" is now going into the penultimate round. The first thirteen episodes of last season come as "Season 7" in our stores. Bender's little shepherd's hour with a beverage vending machine (or rather a "beverage vending machine") has unforeseen consequences, the earth is threatened with final destruction and the Planet Express crew pays a visit to the Oktoberfest, which in the future, however, has hardly anything in common with the fun dominated by beer enjoyment. Moreover, the presidential elections are taking place and Nixon gets an opponent who simply has too many positive qualities to really be a real politician. But what is behind the mysterious opponent and can help Bender Nixon to a new election victory?

"Futurama" has always understood very well how to take the society of the present by an exaggerated futuristic representation on the grain. Whether phenomena of pop culture or political events, the series is bursting with direct or subtle allusions and satirical bite. In the new episodes, which were created after the longer time-out, this doesn't work quite as well as in the first four seasons. These just seemed fresher and bolder. You get the feeling that the makers in the new episodes have been too hard to meet the high expectations of the fans. Certainly, the series is still enormously funny and often very clever. But the class of the early phase of "Futurama" simply couldn't be reached after the comeback.

This is, however, whining on a very high level. Because even in the somewhat weaker episodes, the series still abounds with enormous ingenuity, amusing allusions, subtle wit and wonderfully absurd humour. The educational film about where Robo babies come from or the election commercials with which Team Nixon want to defame the challenger, Fry's constant attempts to prove his love to Leela or the very special greeting with which the refugees from the sinking earth are received on Mars, make the episodes of this seventh DVD box a great pleasure for all "Futurama" fans. So if you can't get enough of Bender and Co., you should have this box delivered by Planet Express very quickly. Worth seeing!

Picture: As usual with a current animation series the picture is very clean and pleases with its rich colors and a good overall sharpness. The sound is very lively in many moments and has some decent surround effects to offer. The dialogues are easy to understand and powerfully mixed, the music is well tuned to voices and effects. But there is a deserved one for that: Good!

Extras: Both DVDs have as a bonus some (partly unfinished animated) missing scenes (Disc 1 approx. 6:41 min., Disc 2 approx. 6:19 min.) to offer. On DVD 1 there is also a jam session with composer Christopher Tyng (ca. 8:04 min.) and on the second disc a "Futurama" screensaver and a karaoke special. In addition, there is at least one audio commentary for each episode, which has a similarly high information and entertainment value as the comparable comments on the "Simpsons" DVDs. Good!

Result: "Futurama" enters the penultimate round of home cinema. The episodes don't have the bite and ingenuity of the first seasons anymore, but there are lots of well done jokes somewhere between satire and kalmauk, which often drive the entertainment value of the series to truly galactic heights. New blood for Bender, the end of the world, unusual presidential elections or a visit to the Oktoberfest make these 13 episodes once again an absolute must for all "Futurama" fans! The double DVD is technically well implemented, the entertaining audio commentaries are especially pleasing with the clear bonus material. absolutely recommended!