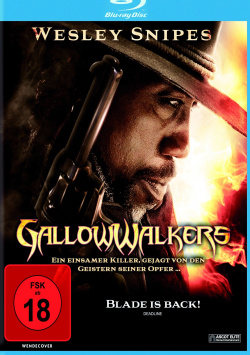 Film: On the silent Aman (Wesley Snipes) lies a dark curse. Whoever the gunman shoots down comes back from the realm of the dead. Only a bullet in the head or a beheading transports these undead back to the eternal hunting grounds. When his big love Sueno (Alyssa Pridham) is brutally raped by five men, Aman kills them in his rage and despair, without making sure that they stay dead forever. And now these men, undead, are about to kill Aman. For this they collect other undead around them, against whose number Aman alone can not arrive. He desperately needs help to face this army of angry revenge angels. The young convict Fabulos (Riley Smith), whom he saves from the gallows, is supposed to stand by his side during the last big battle. But the young gunslinger isn't enthusiastic about that, especially as he doesn't really trust his taciturn teacher...

"Gallowwalkers" is a mixture of western and bloody horror, which director Andrew Goth shot in the Namibian desert. Already in autumn 2006 the shooting, which was already overshadowed by several creative problems, was started. The problems that leading actor Wesley Snipes had in the USA due to tax evasion threatened to cause the project to fail prematurely. But at the end the shooting schedule was kept and the film was successfully finished. But the problems for "Gallowwalkers" were not over yet. The work remained under lock and key for almost six years before being shown for the first time at a festival in England in October 2012. Such a long time without distribution usually does not indicate a particularly high-quality product (although of course there are always exceptions to the rule).

And indeed "Gallowwalkers" has some very clear weaknesses. The dialogues are truly anything but prize-winning, the game of Wesley Snipes is relatively wooden and the story has several deep logical holes. Nevertheless, the strip also has some very positive aspects. His greatest strength is undoubtedly the great pictures, which never look like B-Movie. The camera work is really excellent and if there weren't some completely unnecessary slow-motion shots, the visual realization could almost be described as perfect. Moreover, the movie benefits from a rather unusual genre mix, which works really well over long stretches and produces some very nice scenes.

The showdown is a well done mixture of classic western duel and hearty horror splatter. Here Andrew Goth fully exploits the potential that he leaves lying fallow in other places, thus clearly increasing the entertainment value of his third feature film. All in all, "Gallowwalkers" is truly no masterpiece. But in view of what films have made it into the cinema or onto DVD in the last five years, he doesn't deserve to have been kept under lock and key for so long. If you can overlook some bad dialogue sequences, some not so successful make-up effects on the undead and some small dramaturgical lengths, you get an entertaining and above all visually great horror western, which is well worth taking a look at.

Picture + Sound: Technically Blu-Ray is on a good to very good level. The image is absolutely clean and has excellent sharpness over long stretches, allowing even the smallest details to be seen. The partly really great pictures come out very well. The sound is presented in a DTS-HD Master Audio 5.1 mix, which not only transports the dialogues and the atmospheric ambient noises, but also the somewhat more powerful sound effects very well from the surround speakers. There's really no reason to complain here.

Extras: As a bonus, Blu-Ray has some uncommented B-Roll recordings, as well as eight short promo interviews with the actors. In addition there are the trailer and further program tips of the provider.

Fazit: "Gallowwalkers" is a great filmed mix of horror and western, which doesn't offer the best quality dramaturgically and acting, but which is well worth seeing. Apart from some unnecessary slow motion sequences and some really horrible dialogue sequences, the entertainment value of this genre mix is at a level that makes it quite recommendable for friends of more unusual horror entertainment. The Blu-Ray presents the film in very good picture and sound quality, only the bonus material should not be expected much. All in all: no masterpiece, but recommendable for fans of stylistically flawless B-Movies with small compromises!