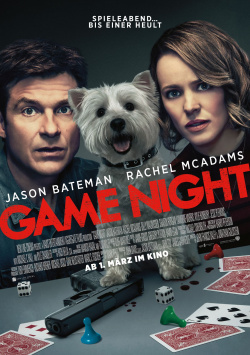 It was love for the first answer - there's no other way to describe the relationship between Max (Jason Bateman) and Annie (Rachel McAdams), who are crazy about parlour games. Since their first meeting during a quiz evening in a bar, the two have been inseparable - in love as well as in play. They regularly organise entertaining game evenings with their friends Kevin (Lamorne Morris) and Michelle (Kylie Bunbury), as well as Ryan (Billy Magnussen) and his changing companions, where the hosts of course always leave the pitch as winners. But when Brooks (Kyle Chandler), Max's brother, invites the troupe to a very special game, in which the friends in teams are supposed to solve a kidnapping, they don't suspect that they are dealing with real gangsters and that the fun they have could actually end life-threatening…

After the overly rough holiday trip with the new Griswold generation in "Vacation", the director duo John Francis Daley and Jonathan Goldstein take a step down in terms of faecal humour with "Game Night" - which leads to the entertainment value skyrocketing. Surely, even in this quite conventional comedy not every gag is right and sometimes the humor overshoots the mark in a very brute way. But on the whole, Daley and Goldstein have staged a very fast-paced and above all witty games evening, which lives from the good interplay of the ensemble as well as from the story rich in twists.

The initial situation is not new. Bill Murray, for example, believed in "Agent Null Null Nix" 21 years ago that he was part of the game, although he was hunted by real gangsters and secret services. But even though the idea has already been used in other movies, Daley and Goldstein manage very well to get some surprising sides out of the whole thing at the end. The biggest surprise might be Jesse Plemons, who as a very strange policeman and neighbour of Max and Annie delivers a wonderfully weird portrayal, which - in contrast to the rest of the film - stays in your mind for a long time.

"Game Night" is not a masterpiece and gives the comedy genre no new impulses. But the film succeeds wonderfully in offering its target audience 100 minutes of light entertainment with many good laughs. If you like US comedies of a less subtle kind, just want to switch off and have a lot of fun at the same time, you should definitely get a ticket for this "Game Night". That's what it's all about: Absolutely worth seeing!