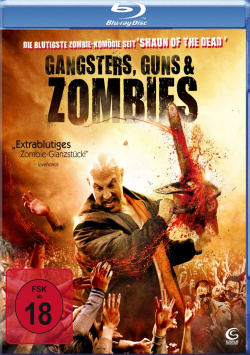 Contents: In fact, Q (Vincent Jerome) and Tony (Huggy Leaver) with their four accomplices only wanted to pull off a simple bank robbery. But as they flee, they discover that the city is overrun by zombies. The way to the hospital, where they should actually deliver the injured Danny (Simon Mathews), is as blocked as the planned escape route. So all they have left is the way out to make their way to the sea. But on the way to the supposed safety the gangsters have to realize that it's hard to hide from the undead...

"Gangsters, Guns & Zombies" is a mixture of gangster film, zombie horror and black comedy produced on a very small budget. This isn't really new, as the recent duel "Cockneys vs. Zombies" proved. And this is exactly where the main problem of Matt Mitchell's feature film debut lies. He does not succeed in gaining new sides to such a genre mix. Everything looks somehow familiar and cribbed somewhere. That wouldn't be too bad if the humor really hit the mark or if the staging was otherwise very stirring. But unfortunately the gags are rather lukewarm and the pace is too slow in many places to really keep the audience happy.

A good example is a scene in which the gangsters have to fight a few zombies in knight's armour (!) while fleeing. This is a nice idea in itself, but the execution is extremely cumbersome, so that after two minutes at the latest there are clear signs of boredom. The gore effects are also too unconvincing to be able to tear anything out. The movie doesn't get really good until the end. In the last few minutes Mitchell gives it another go and presents a nice twist, which reveals an entertainment value, which the movie unfortunately lacks far too often.

Of course Matt Mitchell has to be credited with the fact that "Gangsters, Guns & Zombies" is his feature film debut as a director and that he had only little time and money to realize his script. But even though there are some small weaknesses that can be explained and forgiven, this zombie fairy tale still doesn't turn out to be a really good movie. A few nice ideas and the good ending are enough, however, so that zombie fans who are not afraid of low budget productions can take a look.

Picture + Sound: The fact that the film had to make do with a mini budget is also noticeable from a technical point of view. Visually, it simply cannot keep up with works of a similar nature in terms of content, which have received considerably more money from large studios. But even if colour mixing, contrasts, sharpness or depth of image are not at a very high level, they are absolutely satisfactory for a low budget production. The sound of a DST-HD Master Audio 7.1 mix is relatively powerful, with some good surround effects to be heard in addition to the very directionally mixed dialogues. Good!

Extras: The Blu-Ray has a lot of additional material to offer. In addition to two audio commentaries, one from the crew and one from the cast, there are also two very detailed making of documentaries (approx. 29 min + approx. 16 min) to be seen. Some amusing outtakes (approx. 6 min.), a look behind the scenes (approx. 5:24 min.) and a featurette about the music (approx. 12:37 min.) complete the really extensive bonus package together with the trailer. Very good!

Result: "Gangsters, Guns & Zombies" is not the first film that tries to combine the zombie genre with another subject in a humorous way. Unfortunately, director Matt Mitchell doesn't manage to win over new sides to such a genre-mash up or to lend it a certain independence that would set the movie apart from similar works. Unfortunately, this also highlights the weaknesses of the production more clearly, which ultimately leads to "Gangsters, Guns & Zombies" not being as much fun as it would have been possible with the premise. The Blu-Ray of the movie, on the other hand, knows how to convince with a decent audiovisual realization and very good extras. Nevertheless it is only enough for one: conditionally recommendable!