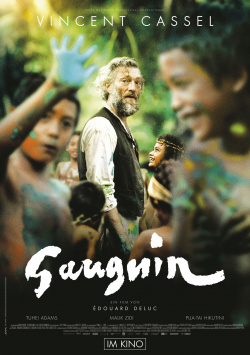 At the end of the 19th century the French artist Paul Gauguin (Vincent Cassel) found no luck in Paris. His works are scorned and he lives in constant poverty. That's why he exiled himself in French Polynesia. Here he wants to find new inspiration for his art, but only loneliness, hunger and illness await him. In the young native Tehura (Tuheï Adams) Gauguin finds a companion and muse who will become the model of his most famous works…

Director Edouard Deluc did not want to treat the living of it artist Gauguin in a typical biopic. Rather, he wanted to try to work out the period of his life that influenced Gaugin's special style, which would lead to his most influential and well-known works. In order to tell this story, Deluc consciously used the stylistic devices of classic westerns to escape the clear corset of a biopic. The book "Noa Noa", in which Gaugin recorded his trip to Tahiti, served as a model for him. The book was freely interpreted by the filmmaker, but the essence was retained. In Tehura, for example, there are several women whom Gaugin met on his journey.

"Gauguin" is nevertheless very concerned with authenticity, especially with regard to the creation of the pictures and their inspiration. And so it's not surprising that the movie is absolutely impressive on a visual level. Here he radiates a power and liveliness that the dramaturgical level unfortunately lacks. Neither Vincent Cassel's strong images nor his intense play succeed in giving the viewer real access to the story or the characters. Deluc doesn't manage to actually realize the tension that underlies the whole thing in a thrilling way.

Too often his staging gets lost in long sequences in which little or nothing happens and in small snapshots that are beautiful to look at in themselves but somehow seem unnecessary in the overall context. Watching it, you quickly sink into a stream of boredom, from which you are only released with the credits. The film is a welcome attempt to show an artist's biography that is not a commercial biopic. For viewers who simply like to get lost in pictures, the whole thing is certainly worth seeing. But those who need more - such as likeable characters or a gripping story - will hardly be enthusiastic about this tough work.  ]