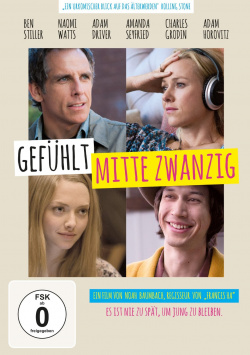 Film: Josh (Ben Stiller) and Cornelia (Naomi Watts) are convinced to have the perfect relationship. While all their friends have children, they can enjoy their freedom to the full. Or better said, they could if they broke out of their everyday routine. So they are happy, but still have the feeling that something is missing. This changes when they meet the young hipster couple Jamie (Adam Driver) and Darby (Amanda Seyfried). Josh and Cornelia are fascinated by the light-heartedness and openness of the young people and only too gladly let themselves be drawn into their lives. On joint bike tours through New York, restaurant visits, parties and relaxing grass smoking, they forget their monotonous stuffness and feel a whole lot younger. However, the imposed youthfulness, which they show from now on, is not only pissed off at their friends. Josh and Cornelia also have to realize at some point that they can't run away from the real problems…

Noah Baumbach also dedicates his latest comedy "Feel in the middle of the twenties" to the neuroses and the emotional chaos of city dwellers. After he had taken aim at the so-called Twentysomethings in his celebrated work "Frances Ha", the mid-forties are now getting their fat off. Baumbach once again proves his outstanding powers of observation for everyday absurdities, which he, of course, exaggerates somewhat. However, it's not the obviously overdrawn scenes that make this movie so well done, even though they do make for some very good laughs. It is rather small moments, wonderfully written lines of dialogue, that create the feeling of extreme authenticity. Baumbach perfectly sketches the conflict between young hipsters and a generation that believes it has stayed young, but in reality is further away from youth than it would like to admit.

Ben Stiller, who has already shone in Baumbach's "Greenberg", pleasantly withdraws and largely dispenses with a clumsy portrayal as in the successful "Nachts im Museum" films. Naomi Watts can also convince at his side. Together, with their desperate attempts to appear hip and youthful, they create a few wonderful moments that barely miss the tragicomic foreign shame. But also Adam Driver ("Girls", "Star Wars: Episode VII") and Amanda Seyfried are great cast as supposedly cool hipster couple.

As amusing as the movie is, it also makes you think in some moments. For example, the question arises as to whether the desire to realize one's own dreams alone justifies extremely egocentric behavior. And it also presents the image of a young generation that is completely overwhelmed by the many possibilities it has to offer. If then some reveal an extreme preference for everything that is somehow retro, then on the surface this may be cool and hip, but could also be interpreted as an escape from one's own future. However, all this is only hinted at relatively subtly. First and foremost, "Feelings in their Twenties" should be fun - and this entertaining New York comedy succeeds very well.

Towards the end, however, the fast-paced production runs out of steam. Although the resolution of the story is very coherent, it lacks the bite that makes just the first half so successful. Nevertheless: Noah Baumbach has succeeded in creating a conventional, but nevertheless captivating, charming comedy, which captures the feeling of life of two generations very well, even with small compromises. Light-footedly staged, well played and thus simple: absolutely worth seeing!

image + sound: The audiovisual realization of the film on the DVD is on a good to very good level for a current cinema production. The picture is absolutely clean and pleases with a pleasantly warm color scheme and a high overall sharpness, which only shows a few small weaknesses in the detail display in dark moments. The sound is not unusual for a film of this genre, but rather reserved, whereby the dialogues sound well understandable from the loudspeakers. There aren't any big surround effects, but nevertheless the whole thing is pleasantly dynamic in many moments due to harmonious ambient noises and the film music. Good!

Extras: There isn't really much here. Besides a detailed interview with Ben Stiller (ca. 19:14 min.) and a conversation with Noah Baumbach (ca. 9:39 min.) there are also promo clips about the Hip Hop dance course (ca. 1:02 min.), the director (ca. 2 min.) and the actors (ca. 2:03 min.). First and foremost, these clips consist of commented film clips. Really profound information is really not offered here. The trailer completes the additional offer.

Fazit: "Feelings in their mid-twenties" is a light-footed staged generation comedy, which can convince with some amusing everyday observations, likeable actors and well-written dialogues. The DVD presents the comedy in an appealing audio-visual version. The bonus material is a bit superficial, but the two interviews are well worth seeing. Altogether there is a clear one here: Recommendable!