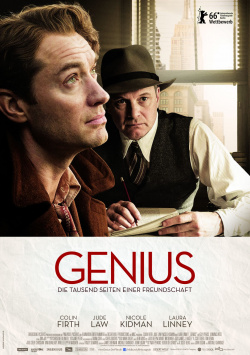 Genius - The Thousand Pages of a Friendship

New York in the 1920s: The editor Maxwell Perkins (Colin Firth) is known for his good intuition when it comes to new talents. He has often prevailed against all resistance when he believed in a writer, thereby making authors such as Ernest Hemingway or F. Scott Fitzgerald accessible to a broad readership. Even when one day the young Thomas Wolfe (Jude Law) is standing in his office with his manuscript, Perkins soon realizes that he has a genius in front of him. He signs the eccentric one and works with him on his first novel, which then becomes a complete success. Already the long and grueling work on this book was an enormous burden for Wolfes lover Aline (Nicole Kidman), as well as for Perkins` wife Louise (Laura Linney). But when the writer submits the next manuscript to his editor, it becomes clear that not only the relationship with the women in their lives, but also their friendship will be put to a hard test in the coming months - especially as Wolfe develops with increasing success a self-destructive paranoia that even Perkins can't control&.hellip;

"Genius - The Thousand Pages of Friendship" is based on the true story of the celebrated editor Maxwell Perkins. In contrast to the writers whom he made immortal by his unerring instinct and his enormous commitment, the name Max Perkins has been forgotten even by many literary connoisseurs. Screenwriter John Logan ("Gladiator", "Skyfall") wanted to change this by adapting A. Scott Berg's award-winning biography of the editor for the big screen. The acclaimed theatre director Michael Grandage was won over to direct the film, and in his cinema debut, he was particularly enthusiastic about the intense dialogue scenes between Perkins and Wolfe. The cast also included actors such as Oscar winner Colin Firth and Jude Law, who were also able to engage a top-class ensemble.

This is actually the best prerequisite for a gripping drama. To a large extent this is also offered here. The scenes in which Perkins attempts to persuade Wolfe to shorten his manuscript, which comprises many thousands of pages, and in which the two men argue for a long time over the smallest formulations, are not only captivating, but also extremely entertaining. It becomes clear how much the editor has tried to bring books onto the market that are accepted by critics and readers alike, without the genius of his authors suffering as a result. Through his work, he has made his clients' books what they are today: Classics of literary history. The film is a good illustration of how enormously important his contribution was.

However, the production also has to struggle with a problem: some scenes are too theatrical in the truest sense of the word and seem a little as if they were designed to be used as clips at upcoming awards ceremonies. Especially the portrayals of Jude Law and Nicole Kidman show that they seem to be geared towards one of the coveted film awards, which clearly loses their naturalness and credibility. That's not to say they play badly. Rather, it's that the most obvious thing about their roles is that they are only played, while Colin Firth succeeds better in merging with his role and thus developing a credible character.

Other than a few lengths and a few clichés, there's hardly anything wrong with the dramaturgical realization of the film. If you are a little interested in American literary history and would like to take a look at the creation of great classics from the point of view of an editor, this atmospheric drama is definitely recommended. Worth seeing