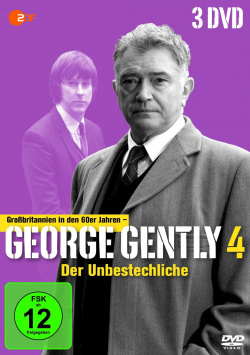 Film: With "George Gently" Martin Shaw, once star of the 70s cult crime series "The Professionals", has landed a new hit not only in Great Britain. The series, based on the novels of Alan Hunter, captivates with an atmospheric 60s outfit, exciting events and the not always easy relationship between Gently and his partner, the young sergeant John Bacchus (Lee Ingebly). In Germany, the series is now finally entering its fourth round with three new films. The three new cases are gripping, extremely atmospherically staged and sometimes really stirring.

This is how the sad fate of a killed schoolgirl turns out to be much more tragic in the end than it seems at first glance. The way the makers always lead the viewer on the wrong track, before it comes to a somewhat surprising resolution, just works out great. But also the case about the death of Gently's former informant China captivates with unexpected twists. In addition to a lot of heavy drama, a little bit of dry humour is used again and again. If Bacchus commits a break-in for Gently, for example, then at least at the beginning this provides a little amusing loosening in the otherwise rather gloomy case. The last two minutes, on the other hand, are really moving to tears again. The fact that all these different moods work well and together produce a coherent and gripping overall picture speaks for the high quality of the series.

The fact that the makers of "George Gently" chose the sixties as the epoch for their crime series proves in many respects to be a brilliant move. For this period of cultural and social upheaval offers enough material for interesting cases that very discreetly also reflect the social problems of the present. In terms of equipment, the makers have really gone to a lot of trouble. Clothing, cars, furnishings - all this reflects the 60s authentically, without appearing artificial in any way.

An extremely entertaining, stirring and exciting crime series that has lost nothing of its high quality even in the fourth season. And that's what the three new cases are about:

Detective Inspector George Gently and Sergeant Bacchus are called to a crime scene in Pinnock Woods: The schoolgirl Mary Claverton, reported missing, was found murdered in a grave. Mary's father, the miner Joe Claverton, reacts violently and impulsively to the news of his daughter's death. From their best friend Hazel, they learn that Mary regularly participated as a studio guest in the popular music show "UpsideDown". Also the evening Mary disappeared, the girlfriends had been to a meeting, but Mary didn't come. Gently and Bacchus dive into the glittering world of stars and starlets in the TV world. Although the aging presenter Tony likes to pick up young girls from the show, Gently and Bacchus don't have a firm motive for the crime. Gently wins the trust of Hazel, who hints that Mary could have had a significantly older lover. When Bacchus finds out that David Nugent, a teacher of Hazel and Mary, has been investigated by Hazel and Mary in a similar matter before, they feel him on the tooth. But his director, Peter Holdaway, stands before him as a protector. The widowed intellectual, who raised his two daughters Margaret and Hazel alone after the death of his wife, is not very enthusiastic about the fact that his youngest is wasting her talent in a TV music show. Then Gently and Bacchus learn after the autopsy that Mary was pregnant. Who was the schoolgirl's lover? Didn't Mary's father really know his daughter had a baby? Or did the TV star Tony, spurned by Mary, overreact? Before their eyes and in the course of their investigation, Gently and Bacchus reveal a fateful family drama that has taken a deadly turn. (Text: ZDF)

When his former friend and informant China dies under unexplained circumstances, Detective Inspector George Gently's suspicion is aroused. He begins to dig deeper, although the alleged accident did not take place in his precinct. That he had renounced the old and neglected Irish drunkard in the quarrel is now a headache for the thoughtful Gently. Did China fall drunk and get fatally injured? When asked by the local pathologist in charge, James Lafferty, Gently has first doubts about the statement of the former policeman, who now works as a forensic doctor in Wellaby-on-Tees under Superintendent Alan Sheperd. Gently and Shepherd know each other from their London days. Sheperd is initially open to Gently's investigation. In the hospital, it turns out that China had no alcohol in its blood and that the injuries he sustained during the alleged fall did not fit in with the course depicted: In which fall do you get injuries on the back of your head and break your nose at the same time? Bacchus has to deal with an extremely traumatised young person who has apparently been subjected to severe abuse. His father, the farmer Geoff Blackburn, admits to not having his two boys under control after the death of his wife. But where's John, David's brother? Gently's research is digging into a wasp's nest: a shattering spiral of violence and prejudice is constantly writing new traces of destruction into the lives of young people and revealing blatant misjudgments by the local police, which have led to the tragic loss of human lives. (Text: ZDF)

A car involved in an accident is pulled out of the river with the body of an unknown person in it - the driver has no lane. Inspector George Gently and Sergeant John Bacchus are shaken: the young woman whose foot was trapped in the car was left alone at night and drowned. A first trace leads to the registration of the oldtimer in Abberwick Hall. This is water on the mills of John Bacchus, who had already tried several times to arrest James Blackstone, the misshapen son of Hector Blackstone, 13th Earl of Guyzance and owner of Abberwick Hall, for drunk driving. But under the guise of expensive lawyers and the protective wings of his dominant mother, Lady Alethea, the charges against James were repeatedly dropped. Although he has an injury in his face and at first gets entangled in contradictions, he actually declares himself willing to identify the dead under gentle pressure from Gently against the will of his mother. This is 19-year-old Ellen Mallam, a student at the Royal College of Music in London. James and Ellen know each other from childhood. Ellen's father, left-wing activist Billy Mallam, who works for the Blackstones as an administrator, is heartbroken about the loss of his only daughter. She had given a concert in the pub of the village the evening before her return to London. Both James and Hector were present, as was the ambitious Anthony Baugh, musician in Ellen's band and equipped with political ambitions. Inspector Gently and Sergeant Bacchus try to reconstruct Ellen's last moments to locate the driver of the car. Bacchus makes a fatal mistake out of anger about the arrogance of the ruling class, which leads to a deep disagreement with Gently. (Text: ZDF)

At the end there is only the conclusion that "George Gently" with his much too short first season has delivered an impressive introduction, in which the mixture of great actors, intelligent and exciting scripts, the atmospheric landscape and the harmonious equipment results in an engaging whole. We are looking forward to the second season!

Picture + Sound: The picture of the DVD is very clean. The overall sharpness is at a good level and, in contrast to the first season, there is hardly any loss of quality even in the darker moments. The colour scheme is very harmonious and captures the 60s atmosphere of the series very well. The sound is available in a powerful stereo mix that lets the dialogues and the music sound very centrally from the speakers. Smaller sound effects and atmospheric ambient noises have been well tuned to create a TV-appropriate sound backdrop. Good!

Extras: Except for a few trailers of the provider there is unfortunately no bonus material.

Fazit: "George Gently - The Incorruptible" is a very good crime series, which goes into its fourth round with three exciting new cases. Martin Shaw is a great investigator and has an extremely strong presence from which the classic crime thriller production can certainly benefit. The stories are constructed in a stirring way and have a lot of surprises in store even for crime story experts. The fourth DVD box presents itself in good picture and sound quality, but unfortunately there is no bonus material this time either. Nevertheless it is very clear: for lovers of first-class British crime food this speaker is absolutely recommendable!