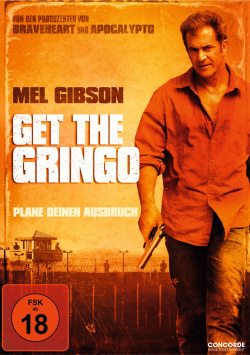 Get the Gringo - DVD

Film: Actually it should be a dead sure thing: Driver (Mel Gibson) and his accomplice captured no less than four million dollars and wanted to flee across the Mexican border with the loot. But now his partner is sitting next to him, riddled with bullets, and the police are right on their heels. Although Driver manages to cross the border with a daredevil stunt, his problems really start here. The Mexican police, who are already expecting the crook on the other side, actually want to hand him over to their US colleagues. But when the cop in charge discovers the money in the car, he prefers to keep the gringo and the loot to himself. Driver ends up in the prison town of El Pueblito, where he has to fear for his life all the time. But he wouldn't be the cunning crook he is if he didn't find a way to make money here and plan his escape in peace. He gets help from the little Kid (Kevin Hernandez), who lives with his mother (Dolores Heredia) in El Pueblito. And soon even the meanest gangster realizes: you shouldn't mess with the gringo...

Mel Gibson has made headlines with his private life rather than with his movies in recent years. And this is primarily extremely negative, which is why he has fallen out of favour in Hollywood and is considered an extreme cash poison. Although he could convince in Jodie Foster's drama "Der Biber", he was not granted a success at the box office. Maybe that's one reason why his latest movie "Get the Gringo" didn't even make it to the theaters in the USA and is also only used as a DVD premiere in other countries. That's a shame, because the black humorous action thriller is really something to be proud of. You can think what you want of the private Gibson, but here he's still as cool and entertaining as he used to be. Whether in the action sequences or in his ironic off-commentaries, Mel Gibson, as a sly gangster, is the ideal cast for this film.

Director Adrian Grunberg, who has already worked with Gibson on "Revenge" and "Apocalypto", doesn't stay long with history in his feature film debut. The viewer is catapulted directly into the rapid pursuit near the Mexican border. And it quickly becomes clear: it's not only fast and bloody, but also pleasantly ironic. And this tone is also maintained in the Mexican prison city, even though there are also clearly darker moments here. But instead of pulling the viewer down with dreary realism and escalating violence, Grunberg manages to put the entertainment value in the foreground in this environment as well.

"Get the Gringo" doesn't even try to be particularly demanding. It is true that issues such as oppression, corruption and juvenile delinquency are woven into history without being played down or ridiculed. Nonetheless, the movie primarily wants to be fun, which it manages to do really well, even with some small flaws. It offers action, humor, a cool hero and one of the most unusual prisons in film history. Surely, the wheel is not reinvented here and perhaps the whole thing is a little too old-fashioned. But if you appreciate solid action with just as much irony as blood, you shouldn't miss this entertaining work. Worth seeing!

image + sound: The very clean and sharp image of the DVD is dominated by warm, earthy tones. Even smaller details such as skin pores shining from sweat are very effective. In dark moments there are slight weaknesses in the sharpness of detail, but this doesn't really matter in a negative way. The German sound is in a good Dolby Digital 5.1 mix and a somewhat more powerful dts mix. The more centrally mixed dialogues sound well understandable from the speakers and are accompanied by some very neat surround effects. Especially in the introductory chase, but also in other fighting and action sequences, the surround effects provide a lot of dynamics in the tonal events. Good!

Extras: The DVD has over 70 minutes of bonus material to offer. It starts with a proper Making of (about 17 min.), in which Mel Gibson talks about his inspiration for the story or Adrian Grunberg tells how he got the directing job. Under "Am Set" there are making of sequences of three specific scenes (approx. 11 min.). Here you can see, among other things, how the rapid chase that opened the film was created. Interviews with Mel Gibson (approx. 8 min.), Kevin Hernandez (approx. 5 min.) and Adrian Grunberg (approx. 11:30 min.), 23 minutes of uncommented B-Roll recordings as well as the trailer and further program tips round off the additional offer.

Fazit: "Get the Gringo" is an action film of the old school, in which Mel Gibson not only convinces with his fists, but also with a good portion of irony. The wheel isn't reinvented here, but this visually very captivating action thriller is exciting and entertaining. The DVD pleases with a harmonious technical implementation and neat extras. For fans of solid action with a little bitty humor absolutely recommendable!