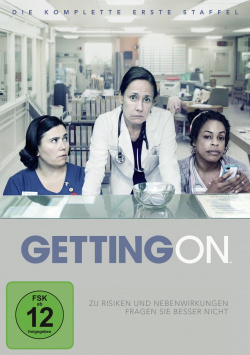 Getting on - The complete first season - DVD

Contents: It's the first day for Sister Didi Ortley (Niecy Nash) at the care ward of Mount Palms Hospital in Long Beach. And she must quickly learn that it is hardly possible to think of an orderly service here. This is not due to the patients, who primarily suffer from dementia or Alzheimer's, but also to big egos, bureaucracy and the hard fight for hospital beds. Thus a small piece of excrement on a chair in the treatment room almost becomes a political issue instead of simply being disposed of and the chair cleaned. Didi receives little backing from her colleague, sister Dawn Forchette (Alex Borstein), as Dawn has long been caught up in this chaotic mechanism. The moods of the attending physician Dr. Jenna James (Laurie Metcalf), who was transferred to this ward for punishment, do not make the work any easier. Patients whose language nobody understands, who get lost in the middle of the corridor or who throw racist insults around them are also a huge challenge. When the new head nurse Patsy (Mel Rodriguez) turns out to be a man who wants to turn the whole ward upside down and orders a transfer of all patients for a holistic cleaning, Didi could despair completely. But she, Dawn and Jenna continue against all odds - not only for the patients...

"Getting on" is the US remake of the BBC series of the same name, which caused enthusiasm among critics and audience for three seasons between 2009 and 2012 and has won several awards. Although the HBO production adheres very closely to the original, especially in the first episodes, the series quickly finds its very own tone. The wonderful main actresses and the good scripts also make the series worth seeing for those viewers who already know the British original. What makes the story about the geriatric ward of a hospital so successful is the mixture of the documentary style and the biting, but never cynical humor. So the whole thing is funny and extremely human at the same time, which achieves the perfect sound for this topic. The fact that in addition in the rather emotional moments the usual Betroffenheitskitsch is completely renounced, supports the positive general impression additionally.

Surely, who expects light comedy food or classical Sitcom maintenance, will perhaps do itself somewhat heavily to befriend itself with the hustle and bustle in the Mount Palms hospital. But those who get involved will be able to enjoy the sisters' fight against bureaucracy, the poker for sick beds or the attempts at interpreting over the telephone. And at the latest when Laurie Metcalf as Dr. Jenna James suffers a kind of nervous breakdown in the middle of the station, it becomes clear what a good hand the makers had not only in writing the scripts, but also in selecting the actors.

Straightforwardly because "Getting on" does not subordinate itself to the broad mass taste, but rather treads bumpy, less well-trodden paths, the series works really well. Who likes biting satires of a somewhat different kind and appreciates high-quality serial food from America should give this first season a chance. Absolutely worth seeing!

Picture + sound: There is hardly anything to criticize about the technical implementation. For a TV production, the visual implementation is absolutely convincing in terms of overall sharpness, colouring and contrasts. Here and there there there are smaller fuzziness, but altogether the small weak points hardly fall appreciably into the weight. The sound is not spectacular, which is not surprising for a comedy series. The dialogues are rather centrally mixed, real surround feeling only comes up very rarely. Nevertheless: for a current TV series, everything is absolutely satisfactory. Good!

Conclusion: "Getting on" with its mixture of almost documentary style and bitter comedy is a really unusual series that skilfully manages the balancing act between satire and humanity. Although this HBO series is only a remake of the BBC production of the same name, the US version quickly finds its very own tone, which makes it just as worth seeing for connoisseurs of the original as it is for lovers of TV comedies of a different kind in general. The DVD presents the six episodes of the season in good picture and sound quality. The bonus material is clear, but qualitatively completely in order. The bottom line is there's one for it: absolutely recommended!