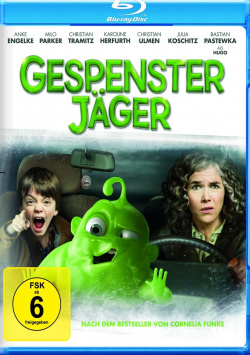 Film: Just when little Tom (Milo Parker) of his annoying sister Lola (Ruby O. Fee) and his parents (Christian Ulmen & Julia Koschitz) that he is not a scaredy-cat, the green phantom Hugo (spoken by Bastian Pastewka) in the dark cellar gives him a huge scare. He learns from his neighbour that the ghost hunter Hedwig Kümmelsaft (Anke Engelke) could help him get rid of the ghost. But the grumpy woman, who has just lost her job at the CGI (Central Ghost Hunter Institute), has no desire to help the boy - especially as his ghost is only a MUG (Mediocre Uncanny Ghost). But when Tom makes friends with Hugo and learns that he has only seven days to bring him back to his old haunted place, otherwise he will dissolve forever, he urges Frau Kümmelsaft to help him. Because the new inhabitant of Hugos Spukort is apparently a UEG, a primeval ice ghost. And only a real professional can chase him away. But how great the danger posed by the UEG is, not only for Hugo, but for humanity as a whole, the boy and the ghost hunter cannot yet guess…

With "Ghost Hunter"The director Tobi Baumann ("Der Wixxer", "Pastewka", "Add a Friend") has staged a funny and exciting adventure film for children aged 8 and over for the children's book bestseller "Geisterjäger auf eisiger Spur" ("The Ghost Hunter on Icy Trail"), the film adaptation of Cornelia Funke's children's book. The international co-production filmed in English makes use of films like "Men in Black" or "Ghostbusters". However, the fact that the movie was actually just a cheerful steal and that there aren't really any own ideas in the script will only bother the older viewers, who know all the "quoted" movies. The same is true for the fact that on closer inspection one quickly discovers that the film wasn't always translated into German in lip-sync. But the target audience will hardly mind these criticisms.

With me some young book reporters have watched the film. The four girls were absolutely thrilled with the film. In her opinion there was much to laugh about, but in some places it was a bit creepy. But first and foremost they had a lot of fun, especially with the numerous ghosts in the CGI and of course with the lovely Hugo. And in fact it's hard not only because of the cute animation, but especially because of Bastian Pastewka's wonderful dubbing not to have to laugh heartily about the slimy MUG again and again. The children didn't even notice the weak points I had to criticize about the film. This doesn't make the weaknesses disappear, but they become secondary for criticism.

Naturally, Baumann brows through all the clichés here, from the annoying big sister to the parents, who are completely targeted in their efforts to achieve perfect upbringing, to the ex-colleague of Frau Kümmelsaft, driven by his oversized ego. At the same time, however, children are also offered much that they can identify with. Tom's fears or his despair that his family won't really take him seriously turn the boy into a normal child, whose heroic transformation will make the young audience all the more enthusiastic.

Therefore it can be said that "Ghost Hunter" isn't perhaps the most original film of the year and that the imaginative ghost comedy won't be able to get viewers over the age of 14 excited. But for children from 8 years on (younger ones might still be too scary in some places) the film is a wonderfully funny adventure that deserves a very clear "worth seeing"!

picture + sound: The Blu-ray picture pleases with a high sharpness of detail and bright colors. Contrasts and black levels are well balanced and even in a few darker moments no blurring can be detected. Altogether there is not really anything to complain about here. The sound is also convincing with a very lively DTS-HD Master Audio 5.1 mix, which gives the surround channels a lot to do, especially in the action-heavy sequences. Good!

Extras: The bonus material is unfortunately a bit poor and too conventional. The most interesting extra is the Making of (ca. 9:08 min.), which deals mainly with the emergence of the lovable spirit Hugo. There are also a few short outtakes (approx. 1:19 min.) and four promo clips that look behind the scenes. There will be a visit to the set (approx. 1:32 min.), a presentation of the actors (approx. 1:40 min. ), another clip about Hugo (approx. 1:44 min.), as well as an insight into the shooting of the ice skid stunt (approx. 1:14 min.). The trailer completes the bonus offer.

Fazit: "Ghost Hunter" is cheerfully stolen from other films and also makes use of several clichés. But the movie is still fun for kids, especially because of the ghost Hugo, which Bastian Pastewka brought to life in a wonderful way, some target-group oriented moments of tension, nice jokes and some nice special effects. The Blu-ray presents the film in appealing picture and sound quality and also has a few short extras to offer. For little ghost fans there is a clear one: recommendable!