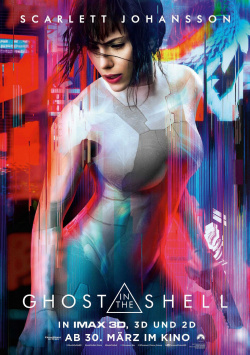 Ghost in the Shell

In the not too distant future, the boundary between man and machine will become increasingly blurred. While until now it was only possible for humans to pimp themselves through cybernetic parts, now the technology exists to transform the human mind into a completely cybernetic body. Major (Scarlett Johansson) is a prototype for this new technology. Her abilities make her the perfect fighter against crime. Together with her partner Batou (Pilou Asbæk), she is on the hunt for a hacker who has managed to log into the human psyche and thus steer people away from him. Only Major seems to be armed against it. But she has no idea what shocking truth the search for the mysterious assassin will lead her to…

"Ghost in the Shell" is probably one of the best-known and most popular mangas ever. Especially Mamoru Oshii's anime film from 1995 contributed considerably to the worldwide popularity and provided some iconic pictures, which today are inseparably connected with "Ghost in the Shell". After further films, television series and video games, the first real film version of the manga is now being shown in cinemas. Director Rupert Sanders orientates himself visually strongly on Oshii's anime, whereby the whole thing has been visually smoothed and dramaturgically simplified with a view to the widest possible audience. The real filming is ambitious, but hardly gets under the fascinating surface of the "Ghost in the Shell" universe.

That may sound very negative now. But even though the enormous potential that the original offers was only marginally exhausted, the film still offers enough show values and tension to be able to please at the end. Scarlett Johansson is despite all controversies a good choice for the main character, as she doesn't only cut a good figure as a sexy fighter, but also can convey the more quiet character moments quite well. The Dane Pilou Asbæk is also very well occupied as her partner Batou, which becomes obvious when he gets the artificial eyes for which this character is known. And old master "Beat" Takeshi Kitano as her superior is also a real cast coup.

Manga and Anime dealt in part with very philosophical questions about being human and the relationship between man and machine. These questions are also dealt with in the real film version, but also in a much more superficial and almost crude way - so that everyone really understands it. This is a pity, because the anime is a milestone of the genre because of its dramaturgical complexity. It is unfortunate that the makers of this filming apparently don't trust their audience to reflect intellectually on the film and that they are more likely to rely on Holzhammer's philosophy. Here, the chance was wasted to turn real adaptation into a real genre milestone. So "Ghost in the Shell" in this version is a very nice shell with unfortunately only little behind it.

The strength of the original also becomes clear here, however: even in this less complex variant suitable for the masses, this vision of the future is still fascinating and gripping enough to offer very good cinema entertainment - less for the mind, but all the more for the eye. And that's enough for a clear one: Absolutely worth seeing!