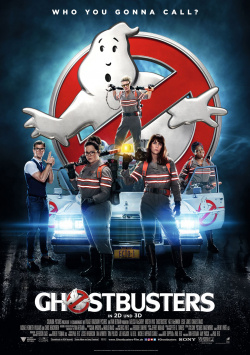 There are movies that are simply timelessly good. Ivan Reitman's 1984 "Ghostbusters" is such a movie. The eerily beautiful comedy about four ghostbusters in New York is still cult even after more than three decades. Again and again there was speculation about a sequel, even though Bill Murray, one of the leading actors, repeatedly made public his dislike for a third part after the not so successful sequel from 1989. After the death of Harold Ramis, the end of the original Ghostbusters was finally sealed - but not the end of the popular franchise. The only question was whether e would continue by handing over the baton to a younger team from the living Ghostbusters, or whether the series would be restarted.

Comedy specialist Paul Feig ("Brautalarm", "Spy") opted for the latter and caused controversy among many fans when he announced that he would send a team of female Ghostbusters to the start. But in the end the indignation was not so much cooked up by the fans as by Feig and his actresses themselves, who insulted all critical voices in part. Even when the first trailer was rightly torn down, in the eyes of the makers it was not the really bad jokes but sexism and racism that caused the criticism of the trailer. Many media especially took up the accusation of sexism and made it very difficult to make a differentiated critique of the film in advance.

I myself am a great film of the original, which I have certainly seen more than twenty times in the last thirty years. I used to listen to the soundtrack up and down, read the film book and am the proud owner of the Lego Ghostbuster car. I wasn't exactly enthusiastic about the idea of a reboot either, because I would have liked to see the old team in action again. That's why I had reservations about the new team, which were confirmed by the first trailer. Nevertheless, I tried to give the film a fair chance. And I have to say that the 2016 edition of the "Ghostbusters" is much better and funnier than the trailer would suggest. But there are also some justified criticisms that have less to do with the actresses than with Feig's production and the script.

The story is told quickly: Erin Gilbert (Kristen Wiig) and Abby Yates (Melissa McCarthy) were once convinced that ghosts exist. While Abby is still trying to prove to the world that she is right about this assumption, Erin has now distanced herself from her earlier research. But as mysterious ghost sightings pile up in New York, the former best friends reunite to get to the bottom of the phenomenon. Together with the ingenious inventor Jillian Holtzmann (Kate McKinnon) and the tough Patty Tolan (Leslie Jones) they found the Ghostbusters. But soon they don't only get to deal with a few little ghosts, but with an enormously powerful opponent, who doesn't intend less than to let the total apocalypse come over mankind…

"Ghostbusters" has some neat effects, some very funny gags and a great Chris Hemsworth to offer. As secretary of the Ghostbusters he is so wonderfully stupid that it is just a great pleasure. At the same time, the film also has to struggle with several problems. There's the humor, for instance, which is sometimes very flat. If a more unavoidable fart joke is tried in the first ten minutes, it is never really a good sign. Surely the original also had some more simple jokes to offer, but overall the humour was rather subtle and clever. Moreover, Reitman's film did not rely primarily on the gags. Even without the humor his "Ghostbusters" is still a really good movie - which you can't exactly say about Feig's version. The biggest problem, however, is Feig's statement that he didn't want to do a sequel to create something of his own. Although he was able to persuade all living actors of the original - with the exception of Rick Moranis - to make small guest appearances, not in their original roles. All well and good, if Feig had really staged something new. But every few minutes there is an allusion to the original and also the story is really not miles away from that of the 1984 movie to justify why he fought against a squadron handover, with which die-hard fans surely could have made friends even better than with this reboot. It is a pity that this nice opportunity was not used.

"Ghostbusters" is not a bad movie. Actually, it's quite good as a simple fantasy comedy on its own. As a remake of a classic, however, the film is a collection of missed opportunities and bad decisions, which was reinforced by the completely unprofessional handling of criticism on the part of the director and the actresses. On the other hand, it's also wrong to judge a movie before you've seen it, just because you don't like the cast or the trailer. Because there's one thing you shouldn't forget: even if you don't like this remake, nobody takes the original away from you. The love for this film is not diminished by a weaker new edition. The sequel with the original crew didn't manage that already.

Whoever hopes that the quality of the original will be reached here will surely be disappointed. But if you just want to be entertained well, if you want to float a little bit in nostalgia and if you are bothered by overdrawn characters (Sorry, but Kate McKinnon is just too much of a good guy), clumsy jokes and a not so imaginative story, you will get enough good moments that justify a visit to the cinema. And therefore there is with some restrictions also a clear one: Worth seeing!