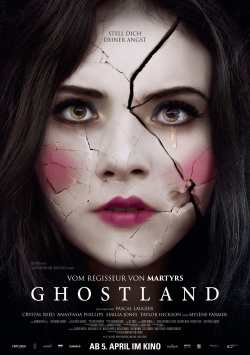 Time for a New Beginning: After the death of her aunt Pauline (Mylène Farmer) moves with her daughters Beth (Emilia Jones) and Vera (Taylor Hickson) to their old country house in the middle of nowhere. The girls are not very enthusiastic about the house stuffed with all sorts of strange curiosities. Vera in particular complains that she had to leave her friends for this. But that will soon be their smallest problem. Because right in the first night in the new home the three are attacked by a perverse killer couple. Although they survive, the trauma remains deep even years later. Beth (Crystal Reed), who has become a successful horror writer in the meantime, seems to have come to terms with the events best. In contrast to Vera (Anastasia Philipps), who still lives with her mother in the old house and is almost constantly haunted by delusions. When things get particularly bad, Beth decides to return to the scene of the terrible crime after 16 years - which quickly turns out to be a big mistake…

With "Ghostland", director Pascal Laugier delivers another shocker ten years after his celebrated "Martyrs", which, however, doesn't go quite as drastically to the point. Nevertheless the 16er release of the FSK is already a small surprise. In a way, sexualised violence against girls is not exactly the kind of material to which the FSK is otherwise so open-minded. Be that as it may, the question of whether the film will satisfy genre fans is much more important. And here the answer is quite clear - yes!

There is a "yes" for the dramaturgical structure, which after about half an hour has a really successful surprise ready. This twist doesn't contribute much to the build-up of tension, but gives the story a very interesting psychological level, which sets the film apart from similar genres. However, it must also be said that the use of a similar twist in the last third no longer works quite so well because the surprise effect is completely absent here. Nevertheless, the twist is clever and well implemented and leaves a very positive impression.

A "No" exists, however, for the fact that the story is clearly drawn out towards the end. The basic idea is good and exciting, but unfortunately not enough to fill 90 minutes. And so the horror repeats itself several times, which makes the movie absolutely predictable, especially for horror fans. And that is really a pity after the skilful construction of the first act. Nevertheless: Even though the movie doesn't quite achieve the effect that "Martyrs" left behind, "Ghostland" as a whole is a thrilling, well played and atmospherically implemented shocker that absolutely deserves to be seen!