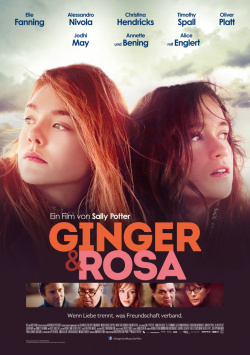 London, 1962: Teenagers Ginger (Elle Fanning) and Rosa (Alice Englert) are best friends since they were born almost simultaneously. And that's a good thing, because together it's easier to rebel against parents and other authorities. The girls dream of an independent life in which they are not constantly controlled by their mothers or have to go to school. Ginger's father, the writer Roland (Alessandro Nivola), is the epitome of this desire for freedom for the girls. As a father and husband, Roland is an absolute failure. But as a free-spirited fighter against the political establishment he is an absolute idol for Rosa. When the girl falls in love with the father of her best friend and begins an affair with him, ginger's own little cosmos finally collapses, while the rest of the world approaches the abyss in the face of the escalating Cuban crisis&.hellip;

With her seventh feature film "Ginger & Rosa" the award-winning director Sally Potter has staged a very beautiful and moving story about friendship and growing up. Potter, who isn't exactly known for his accessible food, has made the wise decision to make the film at a time when strong political movements and the ubiquitous fear of nuclear war have shaped people's lives. To show that a teenager's own personal problems and fears, even in the face of the nuclear threat that existed during the Cuban crisis, can be much more significant than the social, social and political problems surrounding them, is an interesting starting point for a coming-of-age drama.

The problem, however, is that Potter leaves this good opportunity almost completely unused. Although the political anti-nuclear movement in which her father is active is playing, in the end the feeling of a real threat from the Cuba crisis is never really noticeable. Instead, the story focuses on moments at the beginning, that somehow seem insignificant and also don't make the characters seem very likeable. The story strives for authenticity and emotionality, but remains rather undercooled and not very captivating.

The game of Elle Fanning, highly praised by many sides, is also somewhat disturbing. The young actress has already proven her talent many times, but as a rule she is most convincing when she exercises mimic restraint. Here it almost seems as if someone told her that it is so enchanting when she really shines. And so she puts on this radiance somewhat too exaggeratedly and above all too often. This simply no longer seems natural, but simply strained. The same applies to her tantrums, which lack any form of subtlety. She's still playing well, no question. But she seems too artificial, which is especially noticeable in comparison to Alice Englert's very successful performance.

As I said, the story told by "Ginger & Rosa" has the potential to be stirring and moving. But at the end the bulky, badly hypothermic and somehow powerless looking staging doesn't reveal much of this potential. And that is unfortunately, despite the existing qualities, only very conditionally worth seeing!