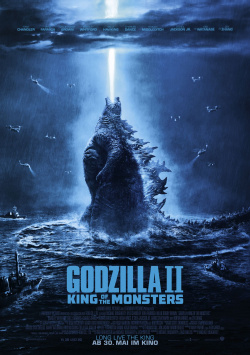 One of the most famous monsters in movie history is back! In 28 Japanese films "Godzilla" has caused fear and terror so far. In the certainty that he would be able to build on this success, Roland Emmerich tried as early as 1998 to make the Japanese cult monster internationally presentable. Although his movie was commercially quite successful, it failed critics and especially "Godzilla"-fans completely. In 2013 Gareth Edwards dared a second attempt for a worldwide "Godzilla" blockbuster. His movie had some very strong moments, but also numerous weaknesses. Nevertheless, the box-office result was satisfactory and "Godzilla" now comes back for another screen appearance.

A few years have passed since Godzilla laid San Francisco in ruins. Since then, more and more monsters of his kind have appeared, to which humans are apparently helplessly exposed. The members of the cryptozoological agency Monarch are trying to find a way to control this danger. But a device that could help them does fall into the wrong hands. When the eco-terrorists around Jonah Alan (Charles Dance) awaken the three-headed King Ghidorah from his eternal hibernation, the end of mankind seems to be sealed. Now there's only one person who can stop this monster: Godzilla!

No question: Michael Dougherty conjures some great Kaiju fights on the screen in "Godzilla II: King of Monsters", but makes the same mistakes as his predecessor: On the one hand, he lets most of these monster fights take place in the dark, seasoned with a little rain, so that you only get to see relatively little - not to mention the fact that the already weak 3D effects are completely off the hook. The much more serious mistake, however, is that again it's not the monsters, but the human protagonists that take center stage most of the time. This is exactly how it reveals how weak the script is. The figures are drawn absolutely flat and only give off cliché-laden platitudes. You just can't help but keep rolling your eyes, always annoyed.

If, however, you don't approach the movie with the claim to get something full of content and only want to see more monster action in the style of the first movie - but much more and more spectacular - including some scenes with fan favourite Mothra, then this sequel offers quite a high entertainment value. Let's hope that for the meeting of "Godzilla vs Kong" in 2020, which is alluded to a little bit in the film, a better script has been written, which doesn't only consist of clichés and really stupid mistakes, as they were made here (For example, when the sentence "ALL systems have failed" is followed by a look at a perfectly functioning sonar device. No, it's clear!). All in all: For fans of part 1 it's worth seeing!